Stewart’s wilt is a bacterial disease of corn that overwinters in the gut of corn flea beetles. While this pathogen rarely causes issues with corn hybrids, it can be devastating to seed corn and sweet corn, which are more sensitive to the disease. Corn flea beetle winter survival is strongly correlated with the harshness of winter, particularly with temperature.

Another method for predicting corn flea beetle survival uses the sum of the average temperature for each month between December and February. The total average monthly temperature was 94.8 F at the Mendon Enviro-weather station. Temperatures were again slightly cooler at the Coldwater Enviro-weather station, totaling 87.5 F for the period. Using this method, three-month totals less than 80 predict poor corn flea beetle winter survival, while totals above 100 predict high survival rates. With this system, the 2015-2016 winter falls near the middle of the “normal” range. The temperature regime would suggest a reasonable chance of normal survival rates of corn flea beetle this spring.

Since the weather does not appear to have greatly reduced the survival potential of corn flea beetles this year, and due to the importance of keeping Stewart’s wilt out of seed corn production fields, Michigan State University Extension suggests growers continue scouting for these early season pests and controlling them according to their seed company agronomic guidelines. 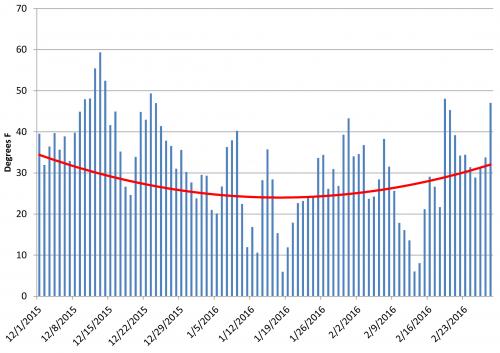