The value of cover crops was demonstrated during windy conditions on March 8, 2017, in southwest Michigan.

While growers often feel they get benefits from the cover crops they plant following crop production, sometimes it is harder to know they are getting a return on the dollars invested from the practice. The afternoon of March 8, 2017, showed us without a doubt the value that vegetative covers can provide in reducing wind erosion soil losses.

The field in Photo 1 did not have a cover crop planted in the fall and had very little crop residue or vegetation to protect the soil from wind erosion.

The field in Photo 2 has a later planted cover crop (cereal rye). Even though there is not a lot of top growth in this field, the vegetative material that was there kept wind erosion losses to a minimum. Dust can be seen in the distance along a headland that did not have the cereal cover planted on it. 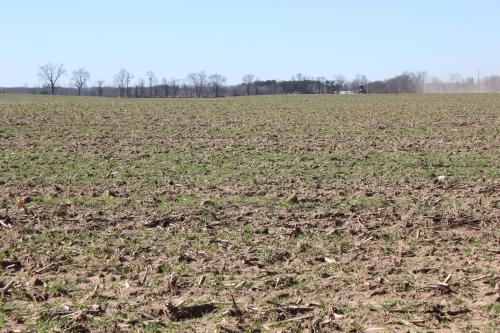 Photo 2. The cereal rye in this field helped protect the soil from wind erosion. Note the dust in the distance along a headland that did not have cereal cover.

Soil loss through wind erosion can be significant, especially on droughty, coarse-textured soils in southwest Michigan. The material that is often carried away from these fields is the finer soil particles. This important fraction often is made up of clay-sized particles. These particles, along with associated organic matter, provide a significant portion of the soil’s critical Cation Exchange Capacity. Nutrients, such as potassium and phosphorus, are often tied to these particles. These nutrients may end up in adjacent fields, but also get deposited in surface water resources, where phosphorus can cause problems with aquatic weed growth.

While the concept of using cover crops has once again become popular over the last few growing seasons, the fact is that southwest Michigan growers have routinely planted large acreages of cover on their operations for many years. This is particularly true in fields where vegetables and seed corn are produced. The earlier harvest windows for these crops allow producers to establish vegetative covers early enough in the season to allow these seedlings to grow.

The traditional cover crops grown in the region are winter cereals, with rye and wheat being the most popular. These covers are fairly easy to establish, can vigorously grow in relatively cool conditions and do an excellent job in reducing erosion.

There is substantial research being conducted by Michigan State University Extension specialists Dean Baas, Erin Hill and Christy Sprague on the relative benefits of different cover crop species, or mixtures of species, that are available to plant and methods and timing of termination. There has also been a very enthusiastic cover crop promotion and establishment demonstration effort by the Van Buren County Conservation District’s Colleen Forestieri and her colleagues over the last several years, which has helped local growers explore adopting cover crops as part of their production systems. While there may be other benefits to establishing cover crops on your fields, one fact is abundantly clear: Cover crops are effective at reducing the impacts of wind erosion in high wind events on southwest Michigan soils.

It is not too late to plant cover crops