On September 20th, 2013, the Environmental Protection Agency (EPA) proposed regulations to limit carbon emissions from future power plants. These regulations align with the first of three major goals of President Obama’s climate action plan, unveiled in July 2013. In announcing that plan, the President pointed to the moral obligations Americans had to future generations to reduce the effects of climate change, including those that impacted public health. The first broad goal of the climate action plan is to cut carbon dioxide pollution in America.

Although carbon dioxide is a naturally-occurring gas and a by-product of animal and human respiration, humans are upsetting the carbon cycle by transforming carbon stored in the earth as fossil fuels (in the form of coal, petroleum, and natural gas) faster than plants can absorb it from the atmosphere. While carbon dioxide is a potent greenhouse gas that traps heat and makes life on earth possible, too much carbon dioxide in the atmosphere over time is changing the earth’s climate, as recently re-confirmed by the International Panel on Climate Change’s Fifth Assessment report.

Under the proposed rules unveiled in September 2013, cuts to carbon emissions would be achieved through setting federal limits on carbon dioxide produced by power plants that generate electricity. Power plants are the largest stationary source of carbon pollution in the United States: 92 percent of energy-related gases were carbon dioxide from burning fossil fuels. (Non-stationary sources come from vehicle emissions.)

In order to achieve this target in a coal-fired plant, the rules would require the plant to install carbon capture and storage (CCS) systems. See below for a diagram depicting a CCS system. 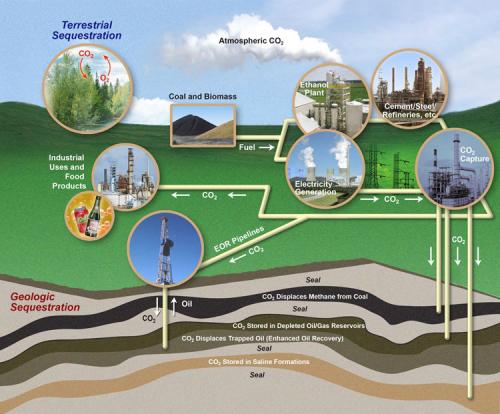 This technology, still in its infancy, involves injecting carbon dioxide in underground wells. Five power plants are currently being built using this technology (none in Michigan).

Some commentators have noted that the new rules for coal-burning plants are unnecessary, given that nearly all new power plants will be powered by natural gas because of its availability and relative cheapness. And the requirement to install CCS in new coal-fired plants will make coal an even less-likely choice. Critics contend that the rules could lead to an over-reliance on natural gas and make the nation’s power supply less resilient to price changes and fuel shortages. Natural gas cannot be stored, unlike coal.

In Michigan, only one new coal-fired power plant is currently being planned, a facility proposed by Wolverine Power in Rogers City. The permitting for that facility was stopped by the Granholm Administration, but was allowed to proceed by the Snyder administration. Given the proposed new rules, as well as some public pressure against the building of a new coal-fired plant, the facility may not be built, according to Wolverine representatives.

Michigan and the Midwest in general rely on coal for energy more than other regions of the country. In 2011, Michigan ranked 9th out of all states in the coal it consumed for energy, and 11th overall in carbon dioxide emissions. However, the overall amount of coal burned for energy fell 3.5 percent from July 2012 to July 2013.

More controversial rules are expected to be unveiled in June 2014 which would limit carbon emissions from existing power plants, the source of close to 40 percent of the country's greenhouse gases.

To comment on the proposed rules to limit carbon emissions from new power plants, visit www.regulations.gov. To speak with an educator about these rules in Michigan, visit the Michigan State University Extension website.

Energy, water and land use: How do they affect each other in a changing climate?