Most of the damage is over with for this year, but it’s not too late to check for chinch bug damage and spot-spray infested areas.

Most of the damage happens in July and August when chinch bugs are full-grown. Plants are injured by a small amount of chinch bug saliva that enters stems when they are sucking juices out of grass plants. This causes patches of infested turf to slowly turn brown. Because chinch bugs tend to be most active in sunny and dry areas of the lawn, the pattern of injury may look like drought stress. However, after irrigation or rain, turf that went into dormancy during dry weather will green-up again while chinch bug-damaged turf will remain brown because it is dead.

I have included two pictures of my own back yard in Delta Township, just west of Lansing, Mich. I checked the dead patches in mid-August by getting on my hands and knees and using my fingers to part the turf down to the soil and thatch level. I could see many small (1/8 inch), black bugs scurrying out of the sun and working themselves into the thatch and soil. The best time to check is when the turf is dry and temperatures are warm – more than 75°F. 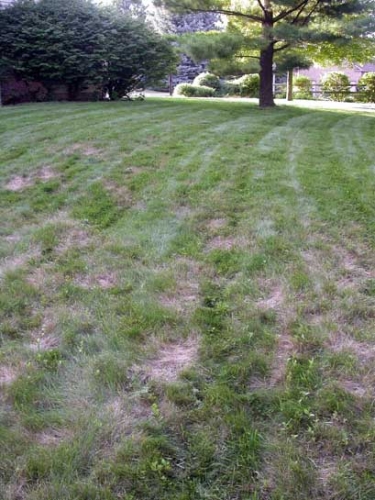 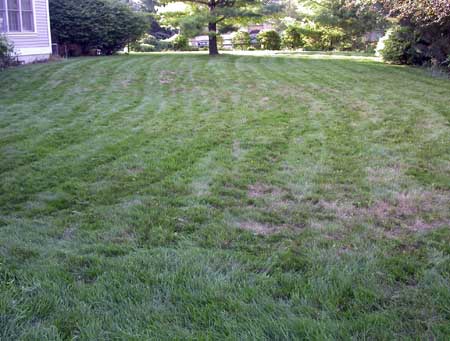 You can still check for chinch bug damage to lawns now, even though most of the damage is over for this year. Look for brown patches of turf, like the dead patches in the photographs. Check for chinch bugs as described sometime during the next two weeks (early September). By early October, most of the chinch bugs will be gone to find a protected location to spend the winter. They may move down deeper in the thatch and soil, or crawl to nearby flower beds or debris.

Once you have confirmed chinch bugs as the cause of turf injury, the best treatment option is to spot-spray the infested areas with Sevin, Talstar, DeltaGard, Scimitar or another pyrethroid insecticide. You can also plan to use a nicotinoid insecticide at the grub rate (Merit, Arena, Aloft, Meridian, Allectus) next year in late May to protect the infested lawn from chinch bugs and grubs all season-long.