Conifers, commonly referred to as “evergreens,” don’t regain needles permanently. In our Lake States region, most species lose their older needles every fall giving the trees a somewhat unhealthy appearance which should be no cause for concern. 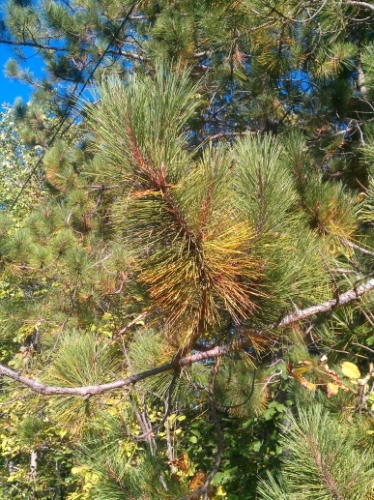 Although referred to by many people as “evergreens,” trees with needle-shaped leaves are better identified as a “conifers.” This conifer classification includes tree families such as pine, spruce, fir, hemlock, cedar and others. Most of the tree species within these groups retain their needles to remain green year-round.

However, all conifers loose at least some of their needles every year. Most retain needles through several growing seasons but shed some of their older, less efficient, needles each fall. Prior to shedding these needles change color from their healthy green to yellow, orange and brownish-red depending on the species. Early in the shedding process, while the needles are still attached to the branches, these trees may have an unhealthy appearance which can cause unnecessary concern. Fortunately, needles lost in the fall from healthy trees should be replaced by new growth the following spring.

A good growing season followed by a few more moderate growing years will cause a greater percentage of the needles to be shed in some fall seasons than others, but is still no cause for alarm.

The larch family group of conifers, which includes the Michigan native tamarack (Larix laricina) species, are an exception to other conifers. This family of trees is fully deciduous, meaning they lose all of their needles every fall. Bare-branched all winter, they green up the following spring.

If whole trees or entire sections of conifer trees – other than larches – have needles changing color, this may be cause for concern. In contrast, needles at the base of the branches near the trunk changing color and falling off in the fall is just part of a natural process and should not be of concern with regards to tree health.

For additional information on how trees adapt to our area’s winter conditions visit the Michigan Forests Forever Teachers Guide.