With relatively cool temperatures and unseasonable snow events in early April slowing normal vineyard operations in Northwest Michigan, the race is on for vineyard managers to complete pruning and tying of grapevines prior to bud break. Depending on spring heat unit accumulation, bud break is expected to occur in approximately two to three weeks, in mid-May. Although there have not been widespread reports of serious bud cold damage, assessment of bud cold damage is still recommended by Michigan State University Extension to guide pruning decisions. For more information on how to adjust pruning to various levels of cold damage, please see Assessing and Managing Grapevines in Response to Winter Injury.

Prior to the bud break stage, sometimes called bud burst, it is important to conduct dormant fungicide applications to reduce disease pressure. Research has shown that these applications can reduce pathogen inoculum by roughly 30 to 50 percent (e.g. for Phomopsis, powdery mildew, black rot and anthracnose). Dormant sprays of lime sulfur and Bordeaux mixture, copper and lime, are commonly applied. When applying these sprays for the first time, follow all the label directions. It may be wise to treat a smaller area or use lesser rates until you feel confident avoiding any phytotoxicity issues. For more information on dormant season grapevine fungicide applications, please see this article.

After applying dormant sprays, it is important to prepare for early-season spray applications beginning after bud break. Managing early season grapevine diseases is critical for successful grape and wine production. However, the rate (amount/unit area), timing (based on phenological stages of grapevines) of fungicide applications and environmental conditions required for various grapevine diseases can be easily misunderstood. This misunderstanding may lead to applying fungicide products at a rate and time that may reduce the efficacy of those products. For this report, we will focus on Phomopsis cane and leaf spot, black rot and powdery and downy mildew.

Generally, there are two phases for fungicide applications for grape diseases:

The most critical period for controlling grape diseases with fungicides

Background: Disease incidence of Phomopsis cane and leaf spot appears to be increasing in many vineyards throughout the Midwest, with crop losses up to 30 percent reported.

Symptoms: Dark lesions on canes, spots on leaves and fruit browning and decay. 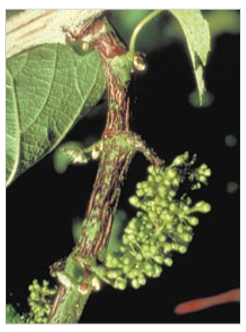 Apply fungicide from bud break through bloom at seven to 10 day intervals depending on weather conditions and according to label directions.

Background: The black rot fungus overwinters in mummified fruit on the vine or on the ground. Black rot may be particularly important in organic production systems because many organically approved fungicides (copper and sulfur) are not very effective for black rot control. 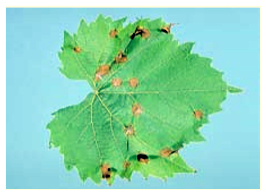 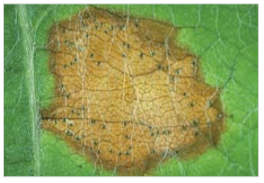 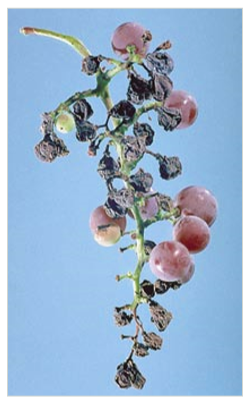 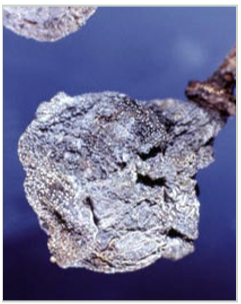 Apply fungicide from bud break through bloom at seven to 10 day intervals depending on weather conditions and according to label directions.

Bottom line for black rot: Sanitation is critical to successful black rot control. Mummies are the most important overwintering source of the black rot fungus. If all mummies and infected canes are removed from the vineyard, there is no source of primary inoculum in the spring and, thus, the disease is controlled. If all mummies cannot be removed from the vineyard, it is extremely important that they are not left hanging in the trellis. The most critical period to control black rot with fungicide is from immediate pre-bloom through three to four weeks after bloom.

Background: If left unchecked on susceptible cultivars, powdery mildew can reduce vine growth, yield, quality and winter hardiness. Research has shown that almost all fruiting bodies (chasmothecia) of this fungus overwinter in bark crevices on the grapevine. In the spring, airborne spores (ascospores) released from the chasmothecia are the primary inoculum for powdery mildew infections.

Symptoms: The fungus can infect all green tissues of the grapevine and develops as white powdery blotches on fruit and mature leaves, and distortion (curling) of young grape shoots or leaves. 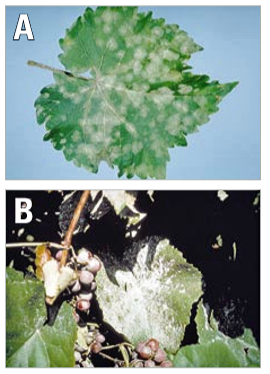 Conditions favoring infection: Although infection can occur at temperatures from 59 to 90 degrees Farenheit, temperature of 68 to 77 F are optimal for infection. High relative humidity is conducive for conidium production and 40 to 100 percent relative humidity range is sufficient for germination of conidia and infection. However, rainfall (free moisture) is detrimental to conidial survival.

Phenyl acetamide and Benzophenone and (FRAC codes U6 and U8, respectively): Torino (cyflufenamid) and Vivando (metrafenone)

Background: Downy mildew is a major disease of grapes throughout the eastern United States. This disease is caused by a fungal-like organism that thrives in extremely wet environments. The pathogen P. viticola causes direct yield loss by rotting inflorescences, clusters and shoots and indirect crop loss by premature defoliation. Vitis vinifera cultivars are typically much more susceptible than interspecific hybrids. The causal pathogen overwinters as microscopic oospores in leaf debris on the vineyard floor which, in the spring, serve as the primary inoculum and germinate in water to form sporangia. When sporangia encounter free water, zoospores are then released and are transferred by rain splash to the surface of the grapevine and enter via grapevine stomata.

Symptoms: The pathogen can infect all green tissues of the grapevine and is expressed as yellowish-green lesions on the upper leaf surface at about one to two weeks following infection. As lesions expand, the affected areas turn brown and necrotic. On lower leaf surface, patches of gray downy growth are usually directly beneath the yellowish-green spots observed on the upper leaf surface. Downy cluster infection is expressed as white to gray sporulation on the berries. 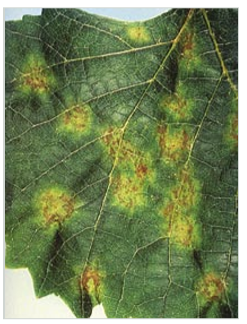 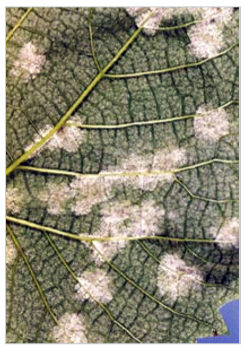 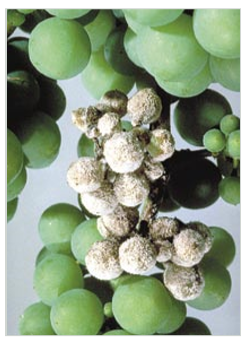 Downy mildew on a cluster.

Conditions favoring infection: At night, during periods of high humidity and temperatures above 55 F. Research indicates oospore germination can occur at 50 F with 0.4 inches of rain when shoots are 4 inches long.

Keep an eye on foliar and fruit diseases in grapes