Some places received a record-breaking 10 inches of rain accumulation this June. Our Michigan State University Enviro-weather stations sometimes do not reflect these rain levels, so conditions are variable across the region. There appeared to be some light hail damage in the Thumb on peppers and squash. Reduction in precipitation and below normal temperatures are predicted for early July.

Reduced sunlight this season and low soil temperatures have slowed down growth in some of our warm-season crops, and may have played into herbicide damage showing up on young plants from pre- and post-emergent herbicides.

Here are the rainfall and growing degree day (GDD) base 50 degrees Fahrenheit accumulations to date from MSU Enviro-weather stations.

Table beets and radishes are being continually picked. If these plants aren’t thinned, they can be sold in larger bunches with smaller roots. Call them snack radishes or canning baby beets. If someone is looking for greens only, offer to remove them from the beet so you can sell the beets to someone who will eat them.

Cauliflower and broccoli are fully headed out at many farms. Cabbage white caterpillars have been found in some hot spots. Because of their herd-style feeding habit, they can be spot-treated with a range of hard and soft chemicals before they spread.

Some growers are on their fifth picking of zucchini, with yellow squash sizing up right behind them. These are both really easy vegetables to scuff up and bruise. Extra special care in handling these at all post-harvest steps will improve their shelf life and shelf appeal at markets.

Sugar snap peas are being picked and consumed quickly. Some growers wish they had planted more. Cabbage white caterpillars also showed up in some snap peas and lettuce in the Thumb this week.

Lettuce is being harvested. Greenhouse lettuces are bolting in some places with a re-plant scheduled.

Early potatoes and greenhouse tomatoes are being harvested.

Many field-planted vine crops are flowering and vining, including watermelon, cantaloupes and cucumbers. We installed another spore trap in southeast Michigan, but counts remain low this week. Pseudomonas/xanthomonas bacterial problems are showing up.

Some winter squash growers were sitting in water for a couple days last week, and plants are looking yellow. However, they will probably pull through.

Greenhouse tomatoes are being harvested and field tomatoes are getting close at some farms targeting the July tomato dirge. Elongated paste tomatoes, such as Romas, San Marzanos, Polish Linguisa and some plums, are very susceptible to blossom end rot. All else held the same, they are more likely to get it. It appears to be a physiological symptom of their breeding, caused by the rapid lengthening and thinning of the vascular walls in their long fruit. They can’t carry calcium to the tips as easily as round tomatoes, and need regular watering to prevent the problem. Calcium sprays applied directly to the fruit have been shown to eliminate the problem, but one proactive grower I met is considering using one Roma per row as an indicator plant for irrigation monitoring.

I have been seeing four-lined plant bugs and earwigs in organic peppers and three-lined potato beetles on organic eggplants. Those particular plant bugs and beetles aren’t very common, and usually do not get to outbreak levels or cause economic damage to plants. However, earwigs will burrow into peppers right where the fruit meets the stem and feed from the inside out. Obviously, you can’t sell these. They seem to be more of a problem in wet years, in messy fields with more weeds and fields with decaying plant matter. 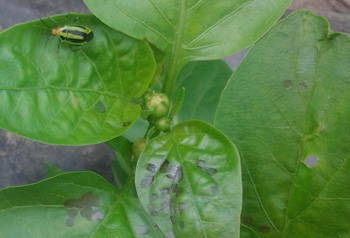 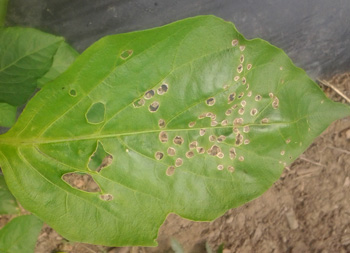 Four-lined plant bug and “window-pane” feeding damage. These have a wide host range, and are usually never economically damaging.

The first step to knocking back earwig population is to clean up the area around the plants. The next step would be to establish traps to lure them away from the plants. As an undergraduate working in Matt Grieshop’s Organic Pest Management Lab, we attempted to trap codling moth larvae with corrugated cardboard strips wrapped around the bases of apple trees. They pupate in the folds of tree bark and the cardboard was an attempt to mimic those conditions for trapping and monitoring. Instead, we captured lots and lots of earwigs in those corrugations. Could be worth a shot in an organic setting. 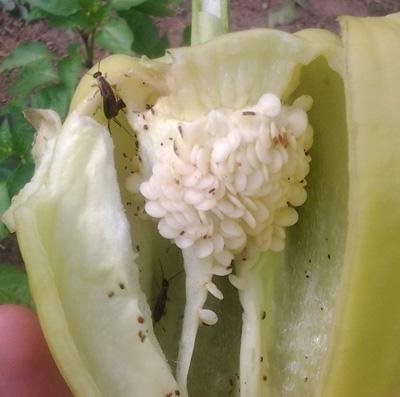 Earwigs burrowing into Ivory peppers. They burrow in just under the cap and live inside, rendering fruit unmarketable. Clean up the weeds and ground cover to dry things out, and try trapping them with corrugated cardboard.

Onions are being picked as spring onions. Some samples are coming in for bacterial leaf blight, which looks like water-soaked and yellow-tipped leaves, and this could be spreading with rain. Michigan State University Extension would like to remind growers that when using Movento for early-season thrips control, be aware that cool temperatures slow down the systemic activity of this product, even with a penetrating surfactant.

Early varieties of sweet corn, such as Vitality and Sweetness, are in full tassel. Later varieties are showing tassels still wrapped in leaves. European corn borer eggs hatched last week in Saginaw, Michigan, fields, and could be found within the whorls. Products to use include Hero, Mustang Max and Radiant.

Please contact me at phill406@msu.edu or 989-758-2502 to pick up any suspected disease samples, or send the diseased plant parts to MSU Diagnostic Services.