Spring caterpillar hatch can be lessened without using chemicals by finding and eliminating the egg masses from which the caterpillars hatch.

Every spring eastern tent and gypsy moth caterpillar seem to appear out of nowhere to feed on the leaves of our Michigan trees. This article is the second of two written by Michigan State University Extension that give an overview of the caterpillar – moth life cycle and how and where to find and remove egg masses in an effort to provide non-chemical control options to landowners.

Gypsy moth caterpillars, Lymantria dispar, are well known in some parts of Michigan for their voracious appetite of especially oak, but also basswood, aspen, apple crabapple and willow tree leaves. Gypsy moth caterpillars, like most caterpillars, feed on the leaves of certain trees while they are developing through their caterpillar stages before eventually pupating into a moth. The defoliation they accomplish in a single year can be alarming, and may contribute to the stress a tree is experiencing. Their feeding is not usually fatal to a tree unless more than 50% of the leaves of a tree are eaten for each of three consecutive years. The caterpillars can be messy, however, as they drop increasing amounts of frass, or fecal pellets, as they molt, or shed skin, to grow bigger.

Once caterpillars reach the maturity, they pupate for around 10-14 days within a hard shell that the caterpillar locates in a corner, or crevasse, or within the ridges of the bark of a tree. The gypsy moth emerges, and quickly finds a mate. Females then lay their eggs and die soon after. Because the female moths cannot fly, and the caterpillars travel mainly by using silk strings and the wind, the eggs will usually be laid on or near the property from which it hatched. Depending on the location, egg laying is complete by mid-September. 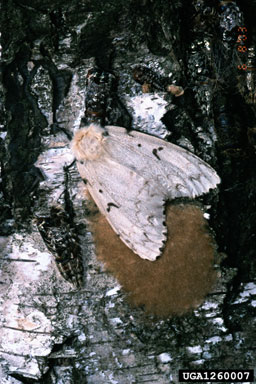 While the female moth is laying the eggs, she plucks hairs off of her abdomen and mixes it in with the eggs. The result is a small mound of caterpillar eggs and hair that can survive even a Northern Michigan winter. In fact, in Roscommon County, gypsy moth eggs hatched even after experiencing harsh winters with temperatures down to negative 30 degrees.

The masses of eggs are typically blond to brownish in color and about the size of a silver dollar, though not as uniformly circular. Egg masses can found just about anywhere on a property, especially in dark protected locations like bird houses, under decks or eves, undersides of lawn chairs and picnic tables, travel, cargo or boat trailers and on just about anything sitting around outside including firewood. Through the years gypsy moth has ‘hitched a ride’ on some of these objects and expanded their Michigan range. Just another reason to check all vehicles for egg masses each spring and to “buy it where you burn it,” and not move firewood.

Because the following year’s population is contained in the egg masses, a non-chemical option for control is removal and disposal of the egg masses. The timing of egg mass removal depends on if the County in which you live has a gypsy moth control program. If it does, best to remove egg masses in the spring, after the control program has conducted surveys to find egg masses in an effort to predict the following year’s caterpillar populations and determine corresponding treatment areas. Gypsy moth control surveys are usually done in the fall, and it is important that the surveyors are able to get a true count of gypsy moth populations.

If the County you live in does not have a control program, consider removing egg masses as you see them from September – April, before hatch occurs. Each egg mass can contain anywhere between 50-1,500 eggs of caterpillars, so removal can be the best way to eliminate these messy caterpillars in your landscape. If you miss some eggs and find gypsy moth caterpillars next year, there are additional methods of control. One is the use of barrier bands, or material that intercepts the caterpillars as they move up and down the trunk of the tree.