During our last conference call several extension agents said they were seeing lots of gypsy moth caterpillars dying on the trunks of trees, due to Entomophaga maimaiga. Entomophaga is a fungus that infects caterpillars, causing a disease, and turning them into a mushroom in about a week. Fortunately, Entomophaga is very host-specific and only infects gypsy moth and not any other animals.

Young caterpillar (less than a 0.5 inch-long) die on the leaves, and in moist weather, sporulate to infect other caterpillars (Photo 1). Large caterpillars (less than 0.75 inch-long) die on the tree trunks facing head down, the bodies becoming shriveled and rubbery in a few days. Eventually the dark-brown to black mushrooms, still in the shape of a shriveled caterpillar, fall to the ground around the base of the trees. In each mushroom are thousands of spores that will infect gypsy moth caterpillars next spring. When young caterpillars become infected next spring, they will die quickly, turn into mushrooms and sporulate immediately during wet weather, infecting other caterpillars. That’s how the fungus can spread quickly through a forest, infecting most of the gypsy moth caterpillars. The fungus in large caterpillar-mushrooms that are present now will not sporulate until next May when the next batch of gypsy moth larvae is active.

The wet spring and early summer that we have had so far this year has allowed Entomophaga to spread quickly. Over the next two weeks watch the trunks of oak, birch, poplar or other infested trees on your property. You may soon find many dead caterpillars (mushrooms). If Entomophaga is active in your area, there will be fewer adults that emerge and fewer egg masses. Where Entomophaga is active, gypsy moth population will naturally decline, so you may not see nearly as many caterpillars next year or the year after. 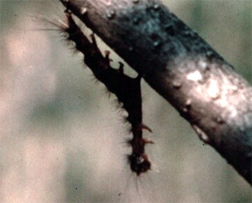 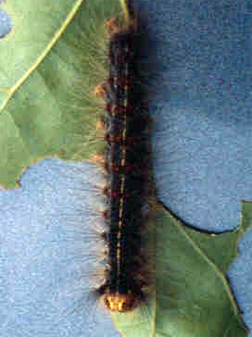 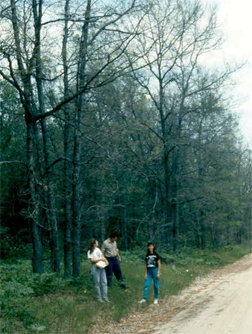 Complete defoliation of an oak forest
block in early July from gypsy moth. 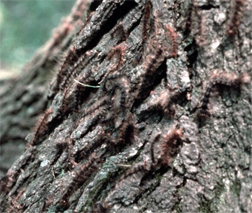 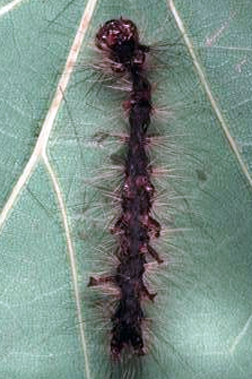 A single dead larva, killed by
Entomophaga, removed from the
trunk and posed over a leaf to
photograph. After a week, the cadaver
becomes hard and rubbery.