Have you ever taken time to consider how much waste you generate during the gardening season? It can be quite an eye-opener. If I measured every load of plastic including pots, flats and plant tags that I dump in our garbage each season, I shudder to think about my contribution to our local landfill.

Dr. Bridget Behe, MSU professor of horticulture marketing believes that baby boomers haven’t had the last say in influencing the world of gardening yet. “I think that boomers are instilling in their kids a value for the environment based upon what we have learned over the years where we went wrong,” she said. Behe believes that children of boomers will be leading the charge in the area of environmental stewardship and taking responsibility for what we do for the future.

A good example is recycling plastic. In the world of horticulture, plastic plays a key roll both in the finished consumer product, but also at growing operations.

Horticultural businesses have been working more towards recycling the plastic that covers their greenhouses and collecting the pots and flats for the same end. “I think that much of the reason consumers haven’t recycled plastic containers very well is that they don’t have the right number labeled in a triangle such as a milk jug,” says Behe. “That doesn’t mean they can’t be recycled though.” Behe cited that some businesses and out-of-state garden centers are not only collecting, washing and recycling containers, but are making money selling the plastic to a recycler.

Stewardship in every pot
The potted plant of the future may also be more earth friendly, says Behe. New technology allows growers to plant directly into containers of potting media formed with a light net-like material. It is set up to be compostable, thus reducing the need for a double flat. Other technology incorporates rice into the container, making it compost friendly in a three to six-year time frame.

Rick Vuyst, President of Flowerland a Grand Rapids based retailer, says that this earth conscious group may not represent everyone, but will definitely influence our overall environmental impact. A good example he says is the increased use of LED lighting for holiday decorating. Indoors and out, these durable lights are cooler and far more energy efficient than traditional strings.

Many horticulture products are becoming more recyclable and are being made of naturally occurring substances. Vuyst notes that because these products tend to cost a bit more, the question will be whether or not consumers will actually open their wallet to match their values.

Vuist says that a more immediate trend is the diminishing amount of spare time folks have. Any product that makes gardening take less time, such as a seed tape that simply needs to be planted into the garden or a pre-planted container that is inserted into a permanent pot at home, are ways that consumers can enjoy the benefit of living things without the work.

Personally, the work for me is part of the enjoyment. I am very concerned about the way people in general want instant gratification in the garden and are not willing to put in the sweat equity to reap the reward. Remember Henny Penny? I use gardening as a hobby to lose all the extra weight I gain in the winter and to strengthen my bones and repair my digestive system. The health benefits go on and on. Behe admitted that it is a little scary to have a whole generation growing up pressing buttons on a controller instead of pushing seeds into the soil. It’s her view that if boomers have their way, when their kids own homes and come of age, they will return to the same gardening hobbies that their parents enjoyed with a whole new round of technology to help. Let’s hope. 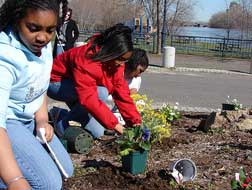