Exotic pests are one of the more serious threats to forest health. While few exotics pose serious challenges, there are some insects, diseases and plants that do. Eradication is possible if small infestations can be detected early.

In this article series, I will review the more serious exotic forest pests. Over 40,000 exotic species have been introduced into North America, and most have proven to be useful to humans and benign to the natural environment. Most exotic introductions fail to establish, but some have grown invasive and damaging.

The oak wilt fungus (Ceratocystis fagacearum) leads to a wilt that kills oak trees quickly. Its origin has yet to be determined, but most scientists agree that it has exotic origins. At any point during the summer, oak trees will turn brown and drop their leaves within two to three weeks. The wilt begins at the top of the tree.

The fungus kills its host, so it must move along or die. The fungus will travel underground from tree to tree through connected root systems until it has killed all connected oaks. Picnic beetles spread the fungus overland by feeding on sap from fresh tree wounds. This is why it is important to avoid wounding or pruning oaks during the growing season, especially before mid-August.

The oaks that die during the summer season will produce fungal spore mats the next spring; oaks that die early in the year might produce the mats by the end of the summer. The mats produce a thick “blister” that cracks open the bark, allowing a sweet smell to escape that attracts sap-feeding beetles. Opening these cracks to reveal the spore mats and blister pads confirms the presence of the oak wilt fungus. To avoid further spread, Michigan State University Extension recommends that you remove and properly dispose of these recently-killed trees. 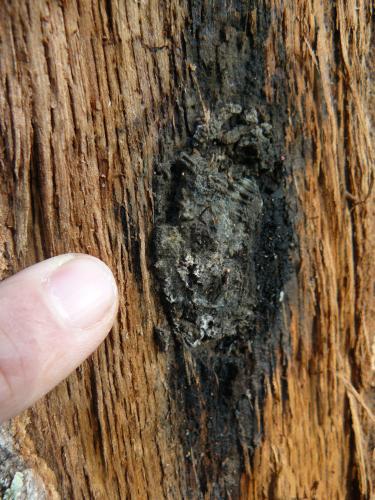 To stop the underground spread of the fungus, the infected root network must be isolated from the healthy roots. A vibratory plow, similar to a cable-layer, cuts five feet deep into the soil to sever these root systems. Afterward, all the oaks within the infected area must be cut and then either processed or destroyed. The visual impact of the plow is minimal, but the removal of the oaks can cause a major change.

For a long time, Dutch elm disease (Ophiostoma spp.) was classified in the same genus as oak wilt but has been recently renamed. Dutch elm disease (DED) hit the Lake States hard in the 1960s and 1970s, killing much of the larger diameter American and red elms throughout the region, including magnificent street trees in our cities and towns. 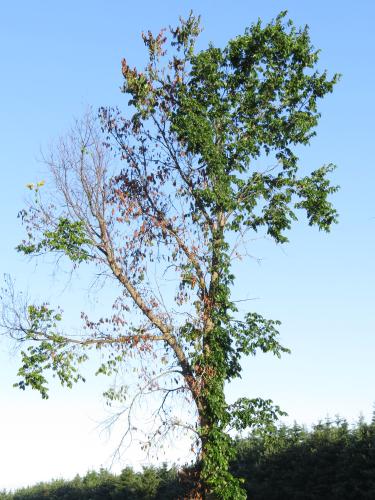 Small bark beetles spread DED. Once elms reach about ten inches in diameter, they attract these beetles that can carry the DED spores. There remain a significant number of elms in the Michigan landscape, roughly equivalent to species such as cottonwood, northern pin oak, tamarack and balsam poplar.

Similar to oak wilt, infected elms begin to wilt near the top of the tree. However, while most trees die quickly, others may take as long as two to three years. DED fungus can also travel through root grafts.

Hickory decline is a complex of pathogens that includes an oak wilt related fungus (Ceratocystis smalleyi). This is a newly-identified fungal species. Like oak wilt and DED, the fungus is associated with a bark beetle. Drought stress and other pathogens also play a role in tree susceptibility. 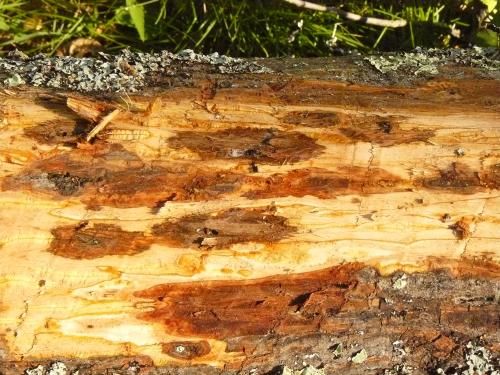 The decline is characterized by thinning crowns and smaller, yellowish leaves. Dozens of oblong cankers occur at beetle entry holes. Bitternut hickory has been hit particularly hard, nearly eliminated in many areas.

Europe introduced the United States to Beech bark disease (BBD) in 1890, but it was first identified in Michigan in 2002, and it was well-established by that time. BBD involves two species of fungus and a “scale” insect. The scales infest the tree bark and introduce the pathogens. The fungi kill the living tissues of the trunk, resulting in top death. Weak points in the trunk or large limbs can break, causing “beech snap,” which can be a threat to human lives and property.

BBD progression has been classed into three categories: advanced front, killing front and the aftermath. Few beech trees survive the spread, and those that have been identified have been used to help propagate BBD resistant nursery stock. This stock may eventually be used to repopulate eligible forests with a beech component.

Exotic and invasive tree diseases have already had a major influence in our forested landscape. Chestnut blight has been nearly eliminated; once the most common tree in the eastern United States. White pine blister rust compromises the success of white pine in many areas. Other serious exotic rusts, cankers and blights have reduced or eliminated native tree species from many areas.

More information about Michigan forest pests can be found on the Upper Peninsula Tree Identification website and the Michigan DNR Forest Health website.