Extent of cold injury to landscape plants from the “Polar Vortex”

Impacts from the outbreak of Arctic air won’t be fully evident until spring and will likely vary across Michigan.

Many people are concerned about the potential impacts to landscape plants due to the severe cold that spread across Michigan Jan. 2-10, 2014, in association with an extended outbreak of Arctic-origin air across the central and eastern United States. The likelihood of significant plant damage from the cold snap is highest in the southeastern Lower Peninsula, where minimum temperatures dipped below the USDA Hardiness Zone (see Map 1) for many locations on Jan. 7-9. 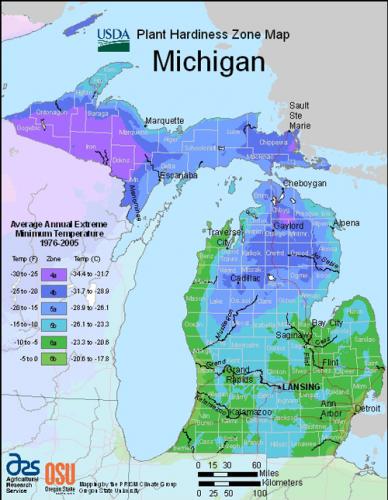 As a reminder, USDA Hardiness Zones are estimated based on long-term weather records and reflect the average extreme low minimum temperature that is expected to occur at a given location. If homeowners or landscapers select plants that are adapted to their hardiness zone, these plants should be able to withstand a typical winter without injury. Hardiness zones for most trees and shrubs are indicated on purchase tags or may be found online using Missouri Botanical Garden’s Plant Finder webpage. 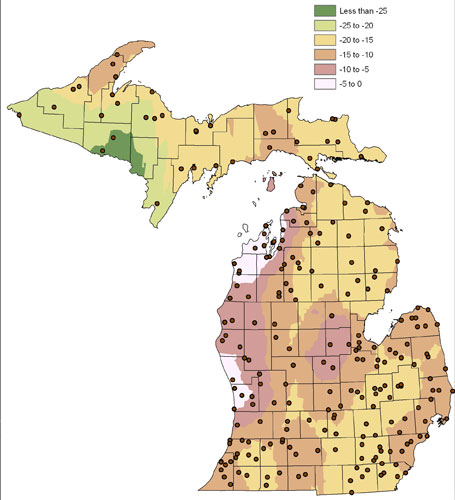 Extreme low minimum temperatures across the state during the cold wave are plotted in Map 2. The minimum temperatures ranged from just below 0 degrees Fahrenheit across lakeshore areas of West Central and Northwestern Lower Michigan to -30 F or lower across interior sections of the Upper Peninsula. In general, it was the most widespread and severe cold observed in Michigan since January 1994.

In northern Michigan, minimum temperatures at some locations approached the upper end of their hardiness range (e.g., interior Western Upper Michigan), which are zones 4a, 4b and 5a, while remaining above the threshold in other areas. Along the west side of the state, Lake Michigan greatly modified the cold and reduced the likelihood of plant injury. For example, in Muskegon, Mich., the minimum temperature during the event was -1 F, well above the hardiness zone rating of -5 to -10. Temperatures in Lansing, Mich., dipped to -13 F, which is in the middle of the zone 5b range (see table).

For locations to the east and south of Lansing, Mich., which are mostly zone 6a, we did observe temperatures below hardiness zone designations. Detroit and Flint, Mich., reached minimums of -14 and -21 F, respectively, which are colder than their hardiness zone minimum of -10. One highly unusual meteorological aspect of the cold wave was the presence of strong winds during much of the event; most extreme low minimum temperatures take place under relatively clear, calm conditions. Such windy conditions act to increase convective heat loss from the plant tissue, potentially increasing the likelihood of plant injury.

Nevertheless, there are several reasons for optimism even in areas where temperatures dropped below hardiness zone minimums. First, many plants we commonly use for landscaping are hardy to a zone or colder than our location. So in Southeast Michigan, for example, many conifers and other common trees will likely be unaffected.

Second, most landscape plants should have been at or near their maximum cold hardiness since we have had a steady dose of cold weather most of the winter. Plants will gain or lose cold hardiness as weather warms or cools during the winter. When the weather turns cold and stays cold, plants typically achieve their greatest cold hardiness in January and early February. Our most common scenario for widespread cold damage is when severe cold is preceded by an extended warm-up.

Lastly, the extreme cold was preceded by significant snowfall, providing an insulating layer of snow that should have protected herbaceous perennials and low lying shrubs.

Predicting freezing damage is difficult due to the variety of factors that come into play, such as degree of plant hardiness, severity and duration of cold, conditions preceding the severe cold, etc. Winter isn’t over yet. Most damage from the “Polar Vortex” cold outbreak won’t be apparent until spring. Michigan State University Extension advises to watch for symptoms including branch die-back, failure to break bud, and even plant death. In some cases, landscapers or homeowners may observe a “snow-line,” indicating the depth of snow at the time of the severe cold. Above the line plants may be damaged; below the line they are alive and healthy. The plants that are most likely to be damaged are those that are marginally hardy for a given zone. A common example are Japanese maples, which are hardy to zone 5b.

Assessing and correcting winter damage to trees and shrubs will be a key component of spring activities for many homeowners and landscapers. MSU Extension will provide updates and guidelines and for dealing with winter injury as we move into the spring.