The great growing conditions for turf so far this year seem to have also resulted in a good crop of fairy ring on putting greens. There are over 50 soilborne basidiomycete fungi that cause fairy ring. Fairy ring is classified in three types according to the symptoms expressed. Type I fairy ring causes the soil and thatch to become hydrophobic and results in dead rings or arcs of turf. Type II fairy ring causes dark green circles or arcs from enhanced turfgrass growth. Type III fairy ring has mushrooms or puffballs in a ring or arc.

So far this year, I’ve been seeing primarily Type II fairy ring. For golf courses, Dr. Vargas recommends the best fungicides for control are ProStar followed by Heritage, Endorse and Bayleton. A wetting agent is typically also applied to prevent or correct any soil hydrophobicity where the fungus was growing. Don’t panic after treatment if you still observe the dark green rings. The fungus may have been killed, but the chemicals it released may still be present in the soil, causing the darker green turf. 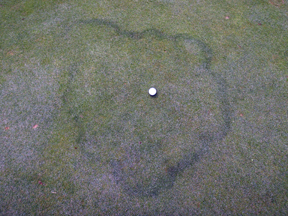