In Michigan during 2016, wheat stripe rust was the premier yield-reducing factor on many farms. With fall planting just around the corner, Michigan State University Extension suggests growers review how the disease develops, how to manage it and what to do this fall.

To date, the stripe rust fungus has not been known to overwinter in Michigan. Mild winters (in the south where it overwinters) and cool, wet summers increase the likelihood of infection. Urediniospores are blown into Michigan on wind currents from the south. Once spores get here, they need proper moisture, temperature and a susceptible wheat crop for infection to occur. Disease development is most rapid between 50 and 59 degrees Fahrenheit with intermittent rain, but spores can survive from 32 to 77 F.

Spores land on a leaf surface, germinate and infect through natural plant openings called stomata. Several hours of moisture on leaves are required for the spores to germinate and infect a leaf. Once inside the leaf, the fungus reproduces and eventually erupts through the leaf surface in a mass of orange urediniospores. The pathogen has a latency of 11-14 days, meaning visible signs of the pathogen don’t show up right away, making scouting a little bit more difficult.

While infections in the fall are possible, conditions are usually not very favorable for a serious infestation. For most of Michigan, wheat is planted late enough that the temperatures fall below optimum for infection within a couple weeks after planting (Table 1). 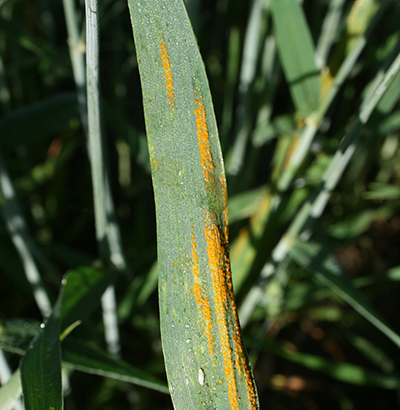 Volunteer wheat can serve as a green bridge and a source of inoculum this fall. Volunteer wheat can also harbor other diseases such as wheat streak mosaic virus, which is spread by the wheat curl mite. It would be a good idea to control volunteer wheat as soon as possible after harvest rather than wait until next spring.

One of the biggest questions posed is, “Can I save seed from a field that was infected this year to plant this fall?” The answer is yes – as long as it is not patent protected. Stripe rust primarily infects the leaves. Rarely does it infect the spike. Even if it does infect the spike, it does not infect the kernels. It is always a good idea to clean and treat seed before planting. It is especially important if you have potential inoculum sources nearby the field you are planting. Seed treatment can delay the onset of the disease on seedlings. The epidemic levels of stripe rust in Michigan during 2016 were unusually high. It is hard to predict the likelihood of this happening again.