Smart gardeners know that heavy fertilization of perennial garden plants leads to flopping over half-way through the season.

Perennial flowers, ground covers and grasses generally don’t need a lot of fertilizer and, in fact, some will react negatively if too much is applied. An over-fertilized perennial will reward gardeners with excess growth that flops over and becomes leggy half-way through the season. Over-fertilization can also affect bloom performance, producing ample foliage at the expense of blooms. Many perennial experts recommend no fertilization when plants are in a healthy garden soil. However, if your soil is composed primarily of sand with little organic component, your plants will most likely benefit from routine, light fertilization.

Understanding the types of plants and their natural growing range will enable you to create a growing environment similar to the plant’s native habitat. It is helpful to keep a watchful eye and journal of plant “behavior” in hopes to correct situations later such as leggy growth and poor performance.

Perennials may benefit from a single fertilizer application just before or at the time that new spring growth is pushing up. The most common recommendation is to apply no more than 1 pound of nitrogen per 1,000 square feet if no compost is used. (For comparison, this is about one-fourth of what you would apply to your lawn during the course of a growing season.) 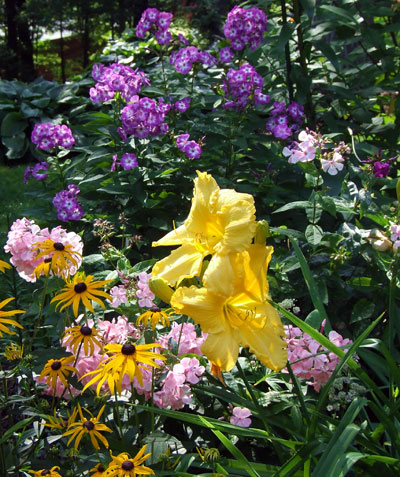 Perennials such as tall phlox (Phlox) and daylily (Hemerocallis)
benefit from fertilization in spring and again by sidedressing
right after bloom.

Broadcasting a slow release fertilizer is the best choice to meet season-long plant nutrient requirements, but you can also use a balanced fertilizer such as 20-5-10. If your soil test indicates that you do not need phosphorous, choose a product such as 20-0-10.

Slow release products are formulated to be effective for either a “three-to-four” month window or a “five-to-six month” window. If you topdress and plan on using supplemental feed at any time during the season, the three-to-four month product should work well. If you only intend on fertilizing only once during the season, then the five-to-six month product should be used.

You can also use the “sidedress” method, applying several tablespoons of fertilizer (according to the manufacturer’s guidelines) in the general root zone of each plant. Make sure not to allow fertilizer granules to cluster in the crown of the plants as it may cause burning. In the early spring, cool soils can have an effect on uptake of certain nutrients, at times making the foliage appear light green or yellow (nutrient deficient). If this appearance does not diminish as the season progresses, spot treat with liquid feed to bring about a quick green up. 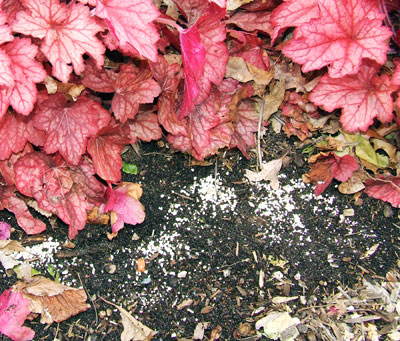 Using a slow-release formulation, sidedress perennials
according to the manufacturer’s label directions.

By applying 1 inch of compost or leaf mold to your garden every year, additional fertilizing can often be eliminated altogether. This is where having a good understanding of each plant’s needs while observing leaf color and growth habit will help you avoid excess fertility. 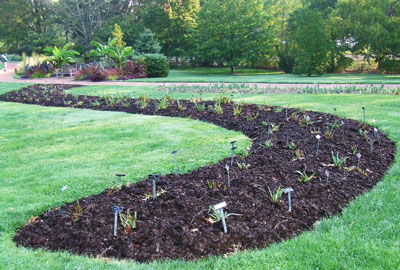 Topdressing a perennial bed with 1 to 2 inches of compost
will provide season-long fertility for most perennials.

Certain perennials tend to be heavy feeders by nature. Daylilies (Hemerocallis), peonies, mums (Chrysanthemum) and tall phlox will benefit not only from a spring feeding, but also with a secondary application during the summer. Sidedressing with a product that has immediate availability (not slow-release) or using a liquid product is the best choice for the summer feeding. Perennials that you cut back to the ground during the season, allowing new foliage to flush out and bloom a second time such as Delphiniums, daisies and lungworts (Pulmonaira) will also benefit from spot treating with a liquid product.

Michigan State University Extension advises to not fertilize perennials in late summer or early fall. This may cause the plants to flush-out additional growth that will not harden-off in time for an early winter freeze.

Potting soils and seed-starting mixes for your garden

Evenings in the Garden spring 2017 series