Michigan State University Extension opened its satellite office at the Grand Rapids Downtown Market in August of 2013. Three MSU Extension educators are located in the office: Kendra Wills and Garrett Ziegler both serving as Community Food System Educators and Kay Cummings, a MSU Product Center Counselor who serves this location on a part time basis. Wills and Ziegler both received graduate degrees focusing on sustainability and were interested in promoting these values in their workplace.

“When we learned about the MSU Office of Campus Sustainability’s Spartan Green Certification, we thought MSU Extension offices should be included in this. Just because we aren’t on campus doesn’t mean we can’t do our part to be responsible citizens,” said Ziegler.

Elements of certification that MSU Extension offices do have control over include: the recycled content of office paper, power settings on equipment, double-sided copying as the default, participation in recycling and waste reduction, use of fair trade coffee in the office, elimination of Styrofoam cups, use of water pitchers instead of plastic water bottles for meetings, purchasing food from local businesses for events, and many more.

Wills and Ziegler pilot tested the new Extension office scoring system based on their office at the Grand Rapids Downtown Market. They acknowledge that they have a key advantage because the Market is a LEED Gold certified building with composting and recycling services. In addition, Ziegler lives close enough to the office he can ride his bike to work when his schedule permits. 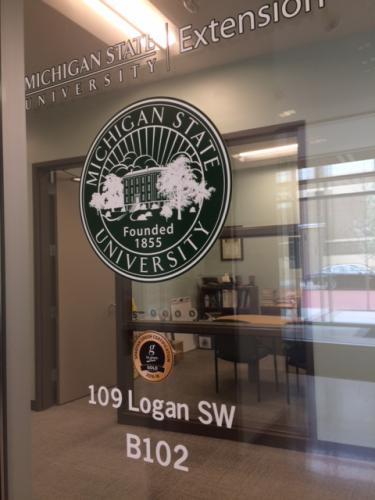 MSU Extension’s office at the Grand Rapids Downtown Market scored at the highest level in the certifications system. Wills and Ziegler acknowledge that this probably won’t be the case for the average office, but are hopeful other MSUE offices will complete the voluntary survey to certify their office before April 2017.

From restaurant to wholesale: Part 1

From restaurant to wholesale: Part 2