During our weekly Landscape Alert conference call on Wednesday, July 9, many of our participating extension agents said they were getting phone calls from residents about gypsy moth caterpillars defoliating oak, birch or poplar (trembling or big tooth aspen) trees, and wandering onto decks, sidewalks and porches. Apparently people are so distressed by the hairy caterpillars that some are calling for an aerial spray next spring to prevent another caterpillar invasion next year. But hold-on one minute: there is a good fungus among us. You may not need to do any spraying next spring. 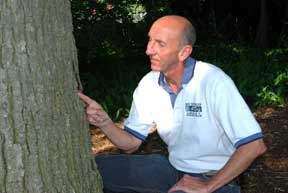 Gypsy moth caterpillars are more abundant in many parts of the state this year because of a natural cycle driven mostly by natural enemies. One of the most important natural enemies is a fungus called Entomophaga. This fungus infects caterpillars, turning them into a mushroom in about a week. Fortunately, Entomophaga is very host specific and only infects gypsy moth and not any other animals. The caterpillars die facing head down, the bodies becoming shriveled and rubbery in a few days. Eventually the dark-brown to black mushrooms, still in the shape of a shriveled caterpillar, fall to the ground around the base of the trees. In each mushroom are thousands of spores that will infect gypsy moth caterpillars next spring. When young caterpillars become infected next spring, they will die quickly, turn into mushrooms and sporulate immediately during wet weather, infecting other caterpillars. It is in this way that the fungus can spread quickly through a forest, infecting most of the gypsy moth caterpillars. The fungus in large caterpillar-mushrooms that are present now will not sporulate until next May when the next batch of gypsy moth larvae are active.

The outbreaks of gypsy moth that we are seeing around the state at this time may be due to two or three relatively dry springs in a row. Entomophaga cannot sporulate and infect caterpillars under dry weather conditions. However, the wet spring and early summer that we have had so far this year has allowed Entomophaga to spread quickly.

Take a look at the oak, birch, poplar or other infested trees on your property. You may find many dead caterpillars (mushrooms) on the trunks. If Entomophaga is active in your area, the gypsy moth population will naturally decline, so you may not see nearly as many caterpillars next year or the year after.

View PowerPoint presentation about gypsy moth and Entomophaga in Michigan.