The old proverbial saying about a fly in the ointment is certainly true this year when it comes to predicting when alfalfa will be ready to harvest. Record warm temperatures in March followed by multiple frost events with temperatures in the low 20s have left producers wondering when they should harvest first cutting alfalfa. The growing degree days (GDD) are running about two weeks ahead of the 30-year average.

Producers and MSU Extension educators have been concerned about the impact of multiple frosts on the alfalfa and several differing ideas were being considered to address the issue. Producers are faced with the challenge of determining the right time to harvest alfalfa for their livestock operation. For the dairy producer, cutting alfalfa too late results in high neutral detergent fiber (NDF), increasing supplementary feed cost, whereas if they cut too early they run the risk of inadequate NDF fiber concentration for proper rumen function. 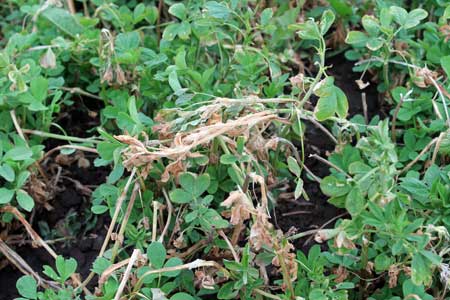 To help solve the issue, several members of the MSU Extension Dairy and Forage Teams are collecting scissor-cut samples of alfalfa to get a snapshot on alfalfa quality. Samples represent multiple sites in Michigan and will be taken weekly until first harvest. Forage quality will be evaluated using wet chemistry analysis for NDF.

Historically, alfalfa producers have relied on several factors to help predict the ideal time for first cutting alfalfa. Several different management tools have been used in combination or alone and include:

Most dairy producers and nutritionists prefer alfalfa to be harvested in the bud stage when NDF concentration is 40 percent, which corresponds to 750 GDD in normal years. Producers with bunk silos that harvest many acres and have an extended cutting window are encouraged to start cutting alfalfa at 680 GDD. However, the hard frosts that occurred after substantial growth this spring might alter this relationship. The PEAQ stick method is a quick way to estimate alfalfa quality and incorporates the different growth stages of the alfalfa plant.

The last column shows the NDF concentration predicted by GDD on May 7, 2012, corrected for the difference observed with wet chemistry a week earlier. This corrected NDF indicates that the NDF is several percentage units lower than what is expected based on the temperature accumulation. To compensate for the differences, producers should consider delaying cutting instead of basing the first cutting on GDD. Additional samples have been taken on May 7 and updates will be provided by May 14.

What happens to corn silage quality due to an early frost?