We have seen glyphosate (Round-Up) damage to cherry and apple trees over the past few weeks. In most cases, damage was to young trees, but we have found damage on 15 to 20-year-old tart cherries. Glyphosate damage is easily recognized; the leaves on a branch or the whole tree are small and narrow with a light yellow or pale green color. The leaves may be so narrow they resemble conifer-type needles rather than broad leaves. This type of foliage has been described as having “mouse-ear” leaves. If growers see glyphosate damage on either a branch or a whole tree, the symptoms give the plant an unhealthy and stressed appearance.

This is the time when trees are storing reserves in the roots for next year’s growth. The activity of glyphosate on weeds is the same in fruit trees: the product must be applied to green tissue to be effective. Glyphosate does not move through the roots via soil application because glyphosate is quickly tied up by soil particles. To have glyphosate damage in fruit trees, the product must have contacted the tree itself, either directly sprayed onto a branch or the trunk, or by drift of spray droplets. Glyphosate contact in the latter part of the season causes the tree to take up the herbicide and translocate it to the roots, storing it with the carbohydrates. In spring, the tree moves its reserves, including the herbicide back to the canopy, and symptoms become visible on the foliage.

Spring damage symptoms can often be explained by one of the following: 1) glyphosate is applied to young trees ( less than third leaf), 2) applications of glyphosate are made late in the season, or 3) when applications are made without a proper weed boom or other tree protection strategies at later application timings.

The general rule of thumb for timing glyphosate is to apply no later than July. This date is variable depending on yearly weather conditions affecting tree bark development and nutrient movement inside the tree. A glyphosate application date in one year may be problematic in another season under a different set of weather conditions. Applications of glyphosate are not recommended for apple trees younger than the third leaf. Use of a non-porous tree wrap or even water-based latex paint will help prevent glyphosate uptake by young bark. Lastly, if growers decide to apply this herbicide later than July, a shield-protected boom on the weed sprayer is necessary, but not foolproof. Growers who are using glyphosate sprays only to control weeds in the tree row need to be especially mindful of sprays on the lower trunk that may be absorbed by young suckers or even by older bark.

Many products with the glyphosate active ingredient are now on the market, and these different formulations could be compounding the recent problems. Use of formulations containing surfactants with aggressive uptake properties may be enhancing glyphosate problems in fruit orchards Dr. Christy Sprague of the MSU Crop and Soil Sciences Department wrote a nice article that will help decipher some of the new formulations in order to minimize damage. Although this article was written for those in the row crop arena, it is still valuable for explaining differences in new products and formulations. See the June 9, 2005, Field Crop Advisory Team Alert at: http://www.ipm.msu.edu/CAT05_fld/FC06-09-05.htm#4. 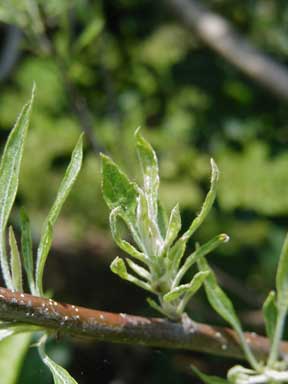 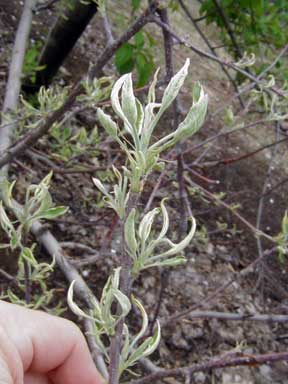 Symptoms of glyphosate injury on apple leafs.
Application occurred last year for symptoms to
appear at the beginning of growth in the spring.