Grain size, where species are and where they might be

Thomas Connor is a PhD candidate studying with Jack Liu. His fieldwork takes place in and around Wolong, China.

A large body of work in the ecology of conservation is devoted to figuring out where species truly are and what causes them to be in some places and not others. Termed species distribution modeling, or SDM for short, this endeavor involves looking at the environment where species are known to occur compared to the environment where they are not, statistically describing these differences, and predicting if the species in question is present in areas that don’t have information.

Because it is nearly impossible to know the full distribution of any given species (otherwise we wouldn’t be modeling!), it is often difficult to know how different ways of sampling, describing the environment, and statistically modeling the relationship between species and their environment affect the accuracy of the models. To solve this, simulation studies make up a species distribution through a defined response to the environment and then apply that response across the hypothetical distribution area.

In our study, we used this technique to investigate one main question related to SDMs: How does changing the grain size (or spatial resolution) of the environmental data affect the performance of SDMs? We also wanted to investigate if and how this relationship was affected by modeling species of different niche breadths (habitat specialist vs. habitat generalist), species that were simulated at environmental grain sizes (mimicking different scales at which they responded to the environment), and on landscapes of different spatial heterogeneity (we used the flat, forested lands of Finland for a homogeneous landscape and the rugged terrain of the Scandinavian mountains across Norway and Sweden for a heterogeneous landscape). Though our different simulated species varied by niche breadth and scale, they all responded to percent forest, elevation, and aspect.

When faced with the inevitable tedium that comes with making up, modeling, and then evaluating those models of eight different species/landscape combination, it can be entertaining to imagine these species as real creatures. I, for instance, like to think that we were modeling dire wolf distributions, though the 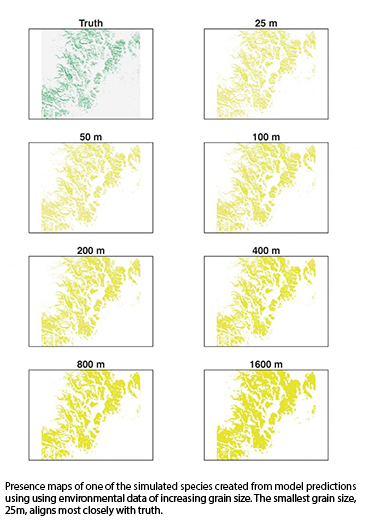 environmental drivers we selected would more accurately reflect some type of shade-tolerant shrub. Regardless the true identity of our simulated species, the subsequent modeling and evaluation steps resulted in some important findings.

First of all, the accuracy of a model’s ability to predict a species’ presence or absence at a location was affected by grain size. Usually, as the grain size of our environmental predictors was increased, the accuracy got lower. This was not always the case, however, as species simulated at a coarser scale were more accurately modeled at that same grain size compared to smaller ones. There were also differences between niche breadths and landscapes. Habitat specialists were more accurately modeled than habitat generalists, and species simulated in the heterogeneous landscape were more accurately simulated than those simulated in the homogeneous landscape. The relationship was not always so straightforward, and these niche breadth/landscape heterogeneity species combinations were affected differently by increases in grain size. Generally, however, in situations where there is a smaller difference in the environment that produces a species presence compared to an absence, models will be less accurate. This problem can be compounded by using large grain sizes which can further obscure the suitability signal between a presence and absence locati