Many McIntosh and Honeycrisp sites are showing increasing signs of maturity this week. First pick likely to begin as early as next week, slightly ahead of predicted harvest date. Galas still a bit immature.

This week in the Grand Rapids, Michigan, area, harvest of early varieties is wrapping up: Premier Honeycrisp, Paula Red, Ginger Gold. Honeycrisp and McIntosh are showing significant maturity development, and first pick may begin as early as next week in some locations. Galas are a little behind, only showing very early signs of maturity this week.

***All sampled fruit are from untreated blocks (no ReTain or Harvista applied), unless otherwise indicated.***

Weather over the past week has been wetter and warmer than normal. Temperatures were slightly warmer than normal with highs in upper 70s to 80 (degrees Fahrenheit) all week, and overnight lows mostly in the 60s. As of Aug. 30, the Michigan State University Sparta Enviroweather station has accumulated 3228.4 degree days base 42 F (DD42). This is slightly above average, which is 3061.7 DD42, and approximately six days ahead of normal.

There was significant rainfall Sunday and Monday, with 2.5-3.5 inches recorded in most places across the region. This is enough to remove any residual fungicides, so make sure to keep fruit covered for late season rots, especially on later varieties and those intended for longer term storage. The rain may also have an impact on fruit, in terms of temporarily diluting flavor and brix/sugars. We’ve also noticed that starch staining appears a little lighter than in some years, particularly in Honeycrisp. 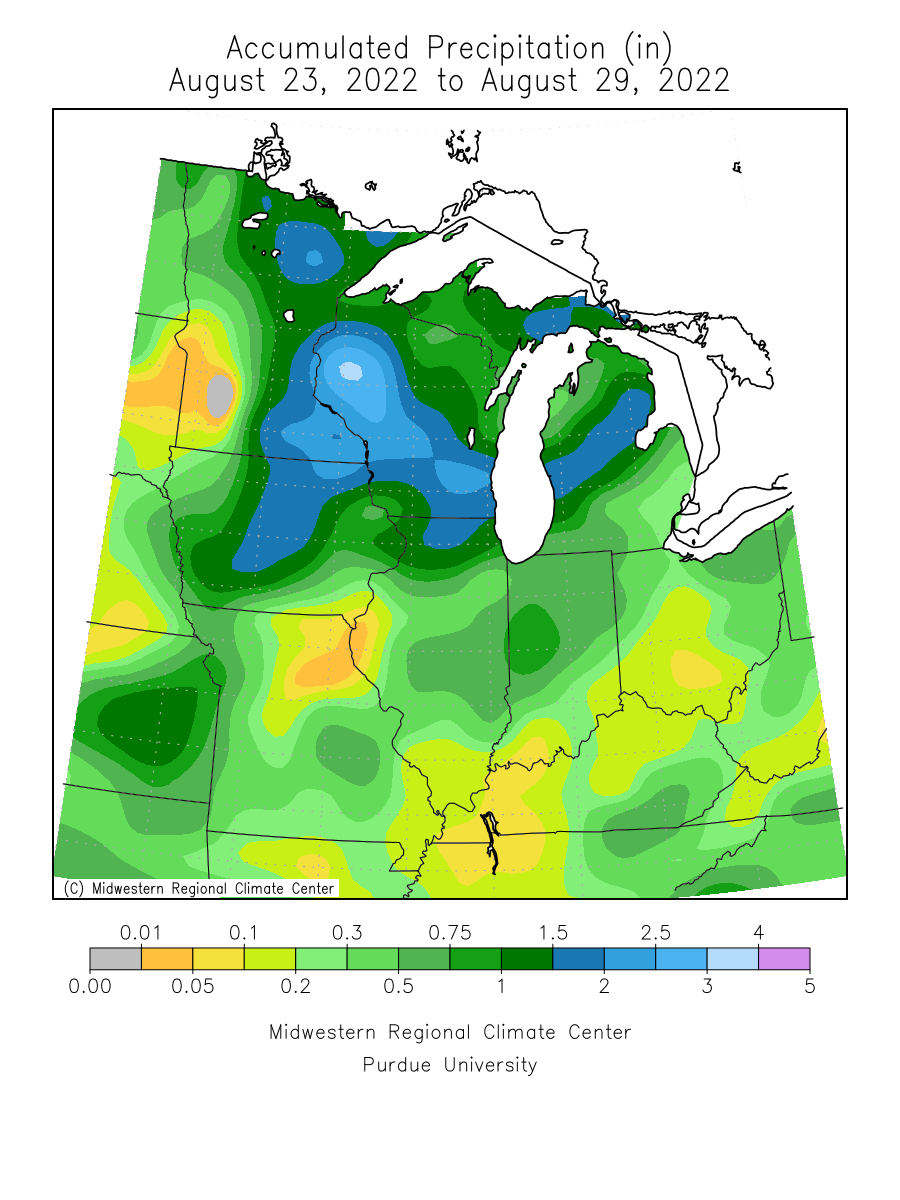 How to read maturity tables

Each week, we test apple varieties that are nearing maturity in the Grand Rapids. We are reporting average values for several samples for each variety. Maximum and minimum values are included for the highest and lowest individual fruits evaluated for each, to give a full spectrum of the maturity. All samples included in the reports have been untreated with ReTain or Harvista, unless otherwise noted.

Samples collected this week included Pacific, Gale and Brookfield strains. Fruit is still somewhat immature. Size is improving, especially in blocks with a moderate crop load, and has improved as a result of the rain over the past two weeks. Red color is dependent on strain, but in general is excellent this year. Background color is still somewhat green. Only a couple of fruit were producing ethylene in one sample collected this week. Starch clearing was minimal, most fruit still only 1-2 on the Cornell starch chart. Overall, fruit is still very firm (20 or greater pounds of pressure), with a few softer fruit bringing down our average. Sugars were still low, possibly diluted a bit by rain from the weekend. At least another week for untreated fruit.

Recommended maturity indicators include pressures of 16-18, starch between 4-5, depending on anticipated length of storage. Color, size, and sugars depend greatly on market. Most untreated fruit needs at least another week before it is mature, if not a bit more. With the big anticipated crop, there is a lot of excitement to get into blocks early. Gala harvested earlier will be appropriate for long term storage.

Honeycrisp fruit sampled this week showed significantly more maturity than last week. Samples were all collected from first pick fruit, and should be used to guide early picking. Fruit inside the canopy is still very green.

Red color development has improved significantly from last week. Background color is still somewhat green in many places, look for a change to pale yellow to indicate maturity. Starch clearing was highly variable this week, with some fruit showing significant starch clearing, while other fruit were just beginning to clear or not at all. This isn’t unusual for this variety, which has very asynchronous ripening, although we were a little surprised by how mature some of our samples were this week (again pointing to the ‘shell’ or color pick that happens first with this variety). Note that this variety has an unusual starch staining pattern: it does not clear in the center first and then in the flesh like other varieties, but instead flesh may begin clearing first. WSU developed a separate scale for starch testing in Honeycrisp, using 1-6 scale. However, we are using a 1-8 scale like the SPI index developed for McIntosh, estimating the percentage of clearing. Sugars were a little better this week, although likely a bit diluted from the weekend’s rain. Pressures were still very good in sampled fruit this week.

Recommended maturity indicators include pressures between 15-17 pounds, starch between 4-5, depending on desired storage length. First pick is likely to begin next week in some locations, slightly ahead of our predicted harvest date. Some locations still need a bit more time. Spot picking only may be appropriate in some places.

Samples of McIntosh collected this week showed advancing signs of maturity. Our samples included Linda and Ruby Mac. Red color is developing well, although dependent on stain. Ethylene was not present in significant amounts in the fruit we tested this week. Starch clearing was significant in some fruit, although other fruit still had very little clearing. Most fruit were between 2-3 on the Cornell starch scale, while a few were between 4 and 5. Sugars are still a bit low, although likely diluted a little by the rain this weekend. Pressures are still adequate but variable.

Recommended maturity indicators are pressure between 14-16 pounds and starch pattern 3-5, depending on desired storage length and conditions. This variety still needs a bit more time in most locations. Early blocks may begin first picks as early as late next week, most beginning the following week.

ReTain applications made three to four weeks before anticipated harvest are beginning to become apparent. In one of our experiments, fruit were treated on Aug. 17, approximately three weeks before harvest. Untreated fruit is slightly more advanced in terms of color, pressure, sugars and starch clearing. Results are below (averages of 10 fruit samples).