Besser Museum for Northeast Michigan looks at commercial fishing past through stories of local fishermen and one historic boat, the Katherine V.

A new Great Lakes Fisheries Heritage Trail offers an opportunity to explore the past, present and future of the lakes through the lens of fish and fishing (see Part 1, series introduction). In this article, we visit Alpena, Michigan and the Besser Museum for Northeast Michigan to explore commercial fishing heritage of northern Lake Huron as told through the historic commercial fishing vessel, the Katherine V.

A Great Lakes gill net fish tug, the Katherine V was built in 1928 on the shores of northern Lake Huron in Rogers City by Native American builder Henry Vincent, and was fished by the Vogelheim family, who owned and operated the Katherine V from her launch until retirement in 1970. At 57 feet in length, entirely enclosed, and powered by a Kahlenberg 3-cylinder engine the tug is an example of late 19th and early 20th century Great Lakes commercial fishing vessels. Constructed of white oak, northern white cedar and cypress, the boat was eventually sheathed in steel and aluminum early in its fishing career to aide in fishing through the winter.

A 1990 research report written by Frank & Nancy Prothero nicknames her the ‘lone survivor’ calling attention to the vessel’s one-of-a-kind attributes: built locally and fished locally in Lake Huron her entire fishing career. This was unique given many other commercial boats were built in shipyards and having one or more ‘sister ships’ built from same design plans. It was also common that Great Lakes boats might change ownership or be repurposed for other industries; and so equally rare that she fished out of same Lake Huron port.

An emblem of Great Lakes fisheries heritage, the Katherine V reflects the social, ecological and technical changes that occurred within the fishery and across the Great Lakes region during the early part of the 20th century.

Representative of a Great Lakes maritime fleet that once consisted of over 900 vessels, this boat exhibits the gill net fishing methods and gear that dominated turn-of-the-century commercial fishing activities. The Katherine V has a design — unique to the region — that allowed fishermen to fish in the coldest waters of the Great Lakes. Its functionality is reflected in the large number of such vessels fishing the Great Lakes in the early decades of the 20th century. Since the near cessation of gill netting in the 1960s, these iconic gill net boats have nearly disappeared. Wood or steel hulled, these enclosed gill net boats play a limited role in commercial fishing today. 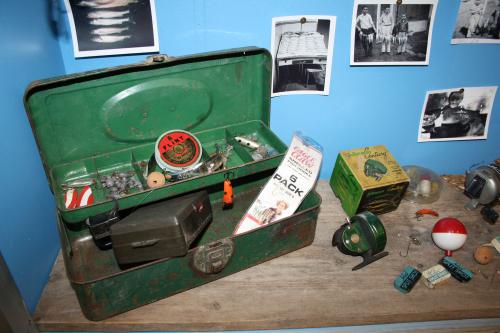 Donated and brought to the Besser Museum in 2003, continuous efforts have gone into conserving the vessel and building an educational exhibit about northeast Michigan’s fisheries heritage. Supported by Michigan Sea Grant and Michigan State University Extension, great gains have been accomplished towards this goal over the past few years thanks to the help of some very dedicated volunteers – including local Alpena High School students - who share a similar heritage and passion for the Great Lakes fishery and the Katherine V. The Besser Museum also boasts a modern day recreational fisheries heritage exhibit, including vintage fishing gear and a wall of mounted fish designed to visitors in the ecological diversity of our Great Lakes fishery.