Michigan Sea Grant Extension has played key role since the 1980s in development of Michigan’s system of underwater preserves.

This is the second in a series of articles focusing on Great Lakes maritime history.

Michigan is richly blessed with maritime heritage resources, and shipwrecks are among the most mysterious, intriguing and numerous. The bottoms of the five Great Lakes are littered with thousands of shipwrecks large and small, sail and steam, old and new. Many have been found, identified and studied, while many wreck sites are yet to be found, including one of the oldest mysteries of the Great Lakes – the location of the wreck of Le Griffon, which has been missing since 1679.

Against this background, Michigan Sea Grant and Michigan State University Extension have collaborated extensively with a variety of public and private sector stakeholders over the past 35 years as Michigan’s bottomland preserve system has grown, from the first preserves, established in 1981 (Alger and Thunder Bay preserves), to the most recent in 2012 (West Michigan preserve). These stakeholder groups have included coastal communities curious about the tourism potential that the new preserves might hold, sport divers wanting to explore and at the same time protect accessible shipwrecks, researchers interested in learning more about these public trust resources, and resource managers responsible for protecting them while at the same time providing recreational access. 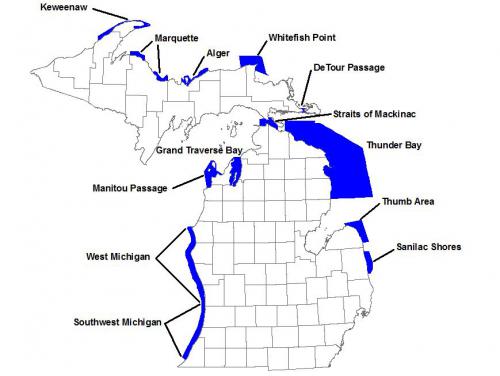 Today there are thirteen Michigan Underwater Preserves encompassing approximately 7,200 square miles of bottomland. Other states have looked at both Michigan’s legislation and preserve experience as models for managing their own bottomland resources. More broadly, Michigan’s underwater preserves represent one of many types of federally designated marine protected areas (MPAs), defined as “any area of the marine environment that has been reserved by federal, state, territorial, tribal, or local laws or regulations to provide lasting protection for part or all of the natural and cultural resources therein."  For more information about MPAs around the country, visit the NOAA Marine Protected Areas website.

Want to learn more about shipwrecks and our other maritime heritage resources up close and in person? Visit any of Michigan’s underwater preserves and associated museums, and if you are in the southeast part of the state next summer, come aboard on one of the many Summer Discovery Cruises offered on both Lake St. Clair and Lake Erie. Sponsored by Michigan State University Extension, Michigan Sea Grant, and the Huron-Clinton Metroparks, Summer Discovery Cruises are a fun way to learn about our many historical, cultural, and natural Great Lakes resources.