Recently greenhouse and nursery growers reported large numbers of small brown moths about 0.75 inches in wingspan in the grasses, weeds and in plants around their businesses. Even homeowners reported these moths in the lawn in large numbers. Upon investigation, they were identified to be Udea rubigalis the greenhouse leaf tier or celery leaf tier. Photos of the adult as well as damage caused by the larvae are included in this article.

Larvae of the leaf tier attack many species of plants including annuals, perennials, weeds and vegetable crops.

It is called a leaf tier because the larvae tie together leaves of the plant they are feeding on with silk.

The insects life cycle is up to four generations per year. Eggs are deposited singly or in groups of 10, and the female is capable of up to 130 eggs per generation. Eggs hatch in about nine days, and the larvae that emerge can live for 3 to 4 weeks. Pupation occurs in the folded leaves and the adults emerge in two weeks. Adults can live for 35 days, thus the entire lifecycle lasts about six weeks on average.

Since they are caterpillars, most pyrethroid insecticides will work. Growers report once they found the larvae in the plant one spray usually controls the problem in most cases.

The key is recognizing the damage as the hardy mums that I saw looked good from the top, but the damage was well inside the canopy. 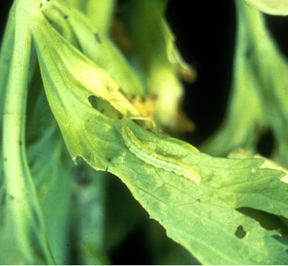 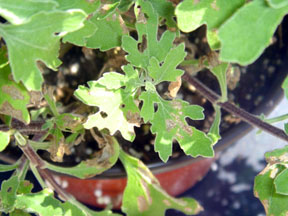 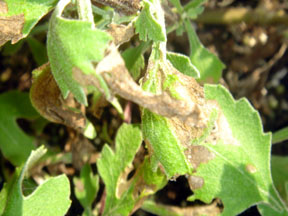