West Michigan has certainly seen an uptick in Lymantria dispar, formerly gypsy moth, in the past two seasons. One site in Grand Rapids, Michigan, has Beech trees that are 100% defoliated. Heavy feeding in some areas led one resident to state, “I’ve never actually seen my driveway turn black!”

This issue is spotty across the entire state, but still nothing compared to what Michigan endured about 25 years ago during the early 1990s, according to Michigan State University Extension entomology specialist Dave Smitley. At that time Many Lower Peninsula counties participated in Bt aerial spray programs for several years. In the worst years, Lymantria dispar defoliation covered an area the size of the entire forest cover in the state of Connecticut.

In 1990, Smitley worked with Leah Bauer of the USDA Forest Service to introduce a natural pathogen known as Entomophaga maimaiga—a fungus fueled by ample moisture in the springtime—to Michigan using infected caterpillar cadavers from Connecticut. Entomophaga infects caterpillars, causing a disease that kills them. A source of the next season’s fungal spores, the dead caterpillar, which can hold thousands of spores that will infect Lymantria dispar caterpillars next spring, ends up being the best bet for control. By 1996, the Lymantria dispar population in Michigan had massively declined.

Many areas around Michigan in the past 10 years have seen little or no damage from Lymantria dispar feeding, even though there are always a few caterpillars around each season. Entomophaga is very host-specific and only infects Lymantria dispar and not any other animals. 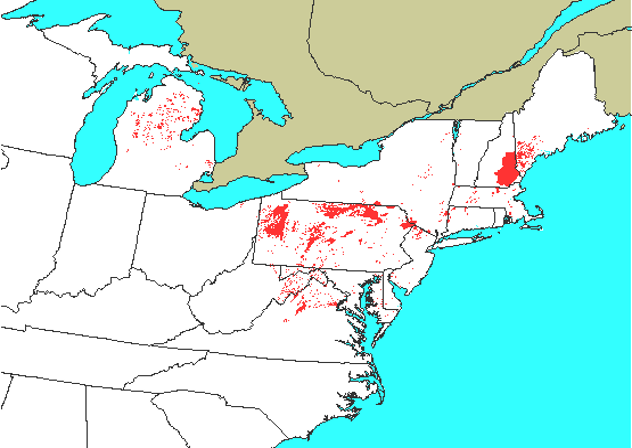 When our weather patterns in spring are dry, Entomophaga cannot reproduce enough to infect next season’s caterpillars. With two consecutive, dry springs (2016-17), this is what has been happening in west Michigan, and we are seeing the impact with outbreaks of the pest.

Spring 2018, however, is a different story. With ample moisture to fuel the pathogen’s development, Lymantria dispar populations are showing obvious indications of decline. Since May, some have noticed small, dried up caterpillars that did not develop fully because they were infected. Each one of these becomes filled with fungus and produces over 400,000 spores. These spores infect other caterpillars, which end up dying on the trunk of the tree, oddly enough always facing downward. Sometimes their bodies will be limp and shriveled or even look rubbery.

These will eventually fall to the ground around the base of the tree, releasing thousands of resting spores that will infect the tiny caterpillars next spring. (Infected caterpillars die before they pupate, emerge as adults, mate and lay eggs.) This fungus will spread quickly and the population is likely to come down the following year.

Lymantria dispar caterpillars grouping on the trunk of this tree show signs of infection and decline. The limp, deformed caterpillars will fall to the ground and provide control next spring. Photo by Rebecca Finneran, MSU Extension.

What to do now?

Many communities have been questioning if they need to spray now or should seek a community program next year. With keen observations, you can determine whether you will have an outbreak in the spring by looking for egg masses in the fall.

With high levels of Entomophaga-infected caterpillars seen this season, it is not likely to be as big a problem next year and even better the year after that. Spraying on a large scale is not warranted unless scouting has determined the need.