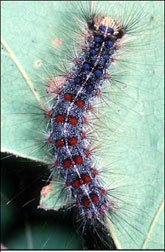 The spring and fall cankerworms can be distinguished from the other three by their missing prolegs and “looping” behavior. They loop when they crawl and are often referred to as loopers or inch-worms because of this. A closer examination will reveal that they have only two or three pairs of fleshy prolegs instead of the standard complement of five pairs of prolegs. 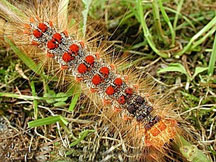