Helping your turf during dry and hot weather

Throughout much of Michigan, lawns are under stress from high temperatures and lack of rainfall.

The lack of significant rainfall across many areas of Michigan combined with high temperatures has resulted in turfgrass stress. Lawns that were soaking wet throughout much of April and early May have now turned brown. Many homeowners choose not to irrigate their lawn and, once the lawn starts to turn brown and rainfall doesn’t return, the concern and questions arise as to whether or not the lawn might die.

The vast majority of lawns in Michigan are primarily composed of Kentucky bluegrass. Typically there is no danger that the lawn is going to die unless water is lacking for six to eight weeks in combination with high temperatures. However, there are no solid day estimates without water for predicting whether the turf will die as many other factors are involved such as high temperatures and traffic. Even if you don’t regularly water your lawn, it might be a good idea to give the turf a little water if it hasn’t received any water for a month. Apply about 0.5 to 1 inch of water just to make sure the lawn makes it through this dry period. The goal of this irrigation is not to turn it green but just to prevent the turf from completely desiccating (severe drying out) and possibly dying. If the weather pattern remains dry I would continue to irrigate at least once every three to four weeks at a minimum.

Here are some other helpful tips for managing turf during hot and dry weather. 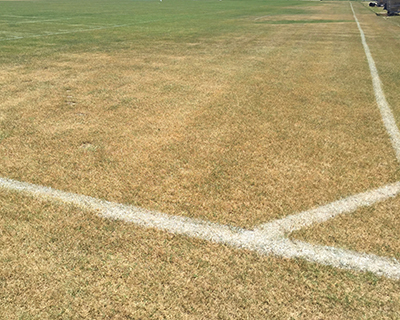 Gaps in irrigation coverage are very obvious this year due to a lack of rainfall.