Training hop bines in Michigan is not a perfect science, but there are a few critical aspects that can assist growers in selecting the best bines and timing their training dates to optimize yield. Second or third year hop plants are generally productive enough to be trained with two strings per plant. While some varieties will “self-train”, hops that have been trained deliberately on the proper date generally produce higher yields.

To train hops, two to four bines from the center of the crown and of uniform length (approximately two feet) are wrapped clockwise around a coir or paper string (Figure 1). It is important to remember that due to thigmotropism and phototropism, hop bines only climb in a clockwise direction around guide strings and will fail to climb if wrapped counter-clockwise.

Bine selection is critical. Crowns will produce a multitude of bines each spring. Early vigorous growth appear purple and is more rigid and often hollow. By selecting more succulent secondary shoots, growers can increase cropload and limit the risk of bines breaking in wind events. Producers should select pristine bines of a similar height. The number of trained bines is also important and will vary by variety. In general, training two to four bines per string has resulted in the greatest yields.

While there are many important best management practices involved in the production of hops, one of the most crucial is training date. Rybacek (1991) cites data from a long term experiment in Steknik (Bohemia) 50.3 degrees N, 13.6 degrees E that shows the optimum training date is approximately May 12. While delayed training tended to reduce cone length, it also resulted in increased cone density and thus overall yield. Since young hop shoots are affected by temperature, in cool, long springs, Rybacek suggests that the best yields will be achieved by training the secondary shoots once they reach around 60 centimeters (24 inches) on average, as opposed to the initial shoots that were exposed to cold temperatures. 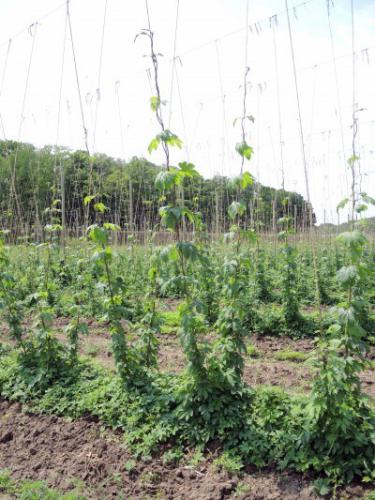 The date of pruning will play a direct role in determining regrowth and therefore the date of optimum training. In general, hops are pruned either chemically or mechanically, three to four weeks prior to training. Here in northern Michigan, there may be seasons where the hops do not emerge soon enough or produce enough shoots to prune. In years where this is the case, it may be better to forego pruning since doing so could delay the optimum training date and potentially reduce yield. 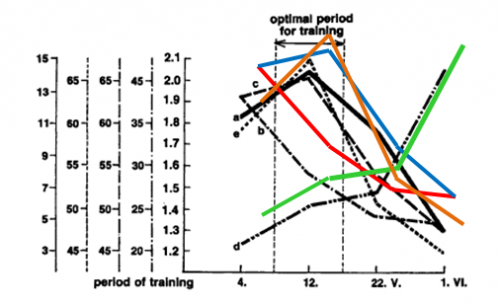 Determining the optimum training date is difficult since the date can vary quite widely by variety. For example, in the Pacific Northwest (PNW) training date varies from the beginning of May through the third week of May depending upon the variety (Figure 5).

While no growing degree day or latitude or day length models have been developed to assist with training time, likely the best method is to work backward from typical harvest dates. Most early-harvested varieties will yield highest if trained early and most late-harvested varieties if trained later (Figure 6). However, this is not always the case for every variety and can vary by growing season. Depending upon location within the state, most growers in Michigan train hops from mid-late May. 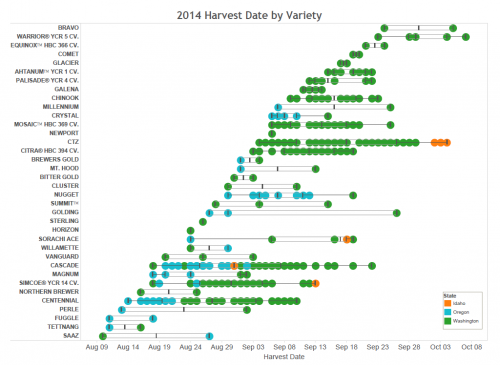 The best bet for growers outside of the PNW is to experiment with training dates based on anticipated harvest dates. It is recommended to keep detailed records of day length, growing degree days, pruning dates, training dates, and yields. To determine accurate growing degree days, visit the MSU Enviroweather website to access data from the weather station closest to your location. It will likely take a few years of trial and error for growers to determine optimum training dates.