The warm weather over the past few weeks has brought out one of the earliest scarab beetles we find in Michigan blueberry fields. This species is a Hoplia flower beetle (Hoplia trifasciata) and the adults feed on young buds and can also feed on flowers. Hot spots have been reported in Holland and West Olive, but they have been seen in a few other regions further south. In 2007, the beetles were active during bloom, but our recent sunny hot days have warmed the soil and brought them out early. They prefer flower buds and leave ragged feeding on the buds and on the flowers from their feeding. We have also trapped these beetles in the white traps used for monitoring fruitworms.

These beetles have marks on each elytra (wing covering) and are a little hairy. This distinguishes them from rose chafer or Japanese beetle which also emerge later. Hoplia beetles may be tan or grey and they are usually here for just a short time, especially in hot weather. It is not known how much economic damage they can do, but the number of flowers or buds affected is usually a very small percentage of the total number. We also do not know whether damaged buds or flowers can still set fruit.

There is no well-studied threshold for this beetle in blueberry. As a rough threshold, if more than 2 percent of flower buds are eaten completely off, you should consider control. This is based on 2 percent of a typical yield being worth more than the cost of an application. In fields of concern, sample a representative 10 bushes spread throughout the field and sample ten flower buds on each bush to give 100 buds sampled. If more than two of these buds are eaten and beetles are still active, consider an application of one of the insecticides that work well against Japanese beetle. Be aware that there are no insecticides registered for use in blueberry for Hoplia flower beetle that have this beetle on the label. Also be aware that we are approaching blueberry bloom and any application of insecticide with long residual activity runs the risk of causing harm to bees. A week from bloom, avoid broad spectrum insecticides. Spray insecticides only if this pest is causing economic levels of damage. 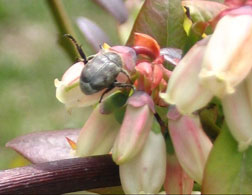 Dr. Isaacs's work is funded in part by MSU's AgBioResearch.