Weed, disease and insect control and fertilizer applications are all being affected by the hot, dry weather in September.

Although forecasts indicate temperatures should be moderating, the National Weather Service Climate Prediction Center is forecasting above average temperatures over the next three months. The combination of warm, dry weather has created some interesting challenges for fall turf management.

Fall is one of the best times to treat difficult-to-control broadleaf weeds such as ground ivy, wild violet, dandelion and white clover. Weeds that have endured droughty conditions may be weak and burning down the above-ground foliage with a contact herbicide in addition to a translocating herbicide will help in control this fall.

Some contact, “burndown,” active ingredients include carfentrazone, sulfentrazone, pyraflufen. Traditional translocating active ingredients (2,4-D, MCPP, dicamba, triclopyr, clopyralid, fluroxypyr, quinclorac, etc.) move into a targeted weed quickly after application and then move with sugars to an active site where it kills the weed. If the weed isn’t growing due to drought or high temperatures, then the herbicide cannot effectively move to the active site in the weed. Although a contact or burndown active ingredient does not move to an active site, it does disrupt the membrane of the plant, which only requires that it be applied to the surface of the plant.

The recommendation for herbicide applications during this dry fall is to attempt to hedge your bets by applying a herbicide that mixes systemic (translocating) active ingredients with a contact (burndown) active ingredient (i.e., products include SpeedZone, 4-Speed XT, RedZone, Surge, SureZone, etc.). The translocating active ingredients have at least a chance to move to the active site, while the contact will provide some extra burndown, which is not dependent on the growth of the weeds in unirrigated sites.

On golf courses, there have been many cases of Waitea patch occurring from late summer through early fall. Waitea patch is caused by Rhizoctonia zeae and any of the good, brown patch fungicides will help manage it. However, chlorothalonil is not very effective in controlling Waitea patch.

Again this year, as summer wound down and fall arrived, resistance raised its ugly head. Similar to last year, the Vargas lab has been receiving calls about fungicides providing only seven days control of dollar spot. This is called quantitative resistance, which shows up as a shorting of the interval of control compared to the qualitative resistance where the fungicide no longer works at all at any interval.

Rust has become very prevalent this fall, especially in un-irrigated areas. Rust diseases are characterized by yellow to dark brown urediospore infestations that, from a distance, make turf stands appear orange or yellow. As a general rule in almost all cases, rust is considered a cosmetic turfgrass disease that, although it may discolor the turf, will not result in widespread turfgrass death. Fungicides are not usually recommended for control, precipitation and a fertilizer application to stimulate growth will help the turf recover from rust infestations. 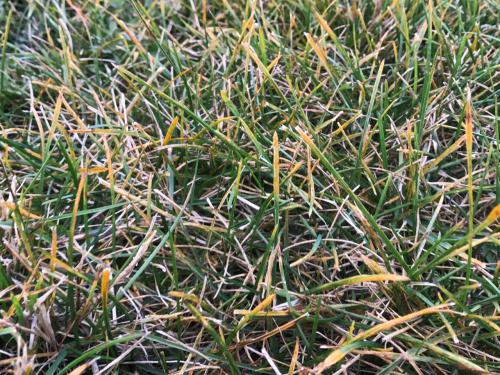 Fast release sources such as urea that are applied to dry, dormant turf could result in high gaseous volatility losses. Stabilized urea fertilizers contain a urease inhibitor to suppress volatilization and would be beneficial. However, even if you plan on using these products, wait until some precipitation returns to stimulate turf growth before making an application.

In the last three years, Japanese beetles have spread further into the Thumb area, up to Houghton Lake and Pinconning on the eastern side of Michigan, and up to Traverse City on the western side. All of these areas are seeing new turf damage from Japanese beetle grubs as the skunks and raccoons dig turf to find them. This includes golf course, home lawns and sod farms. 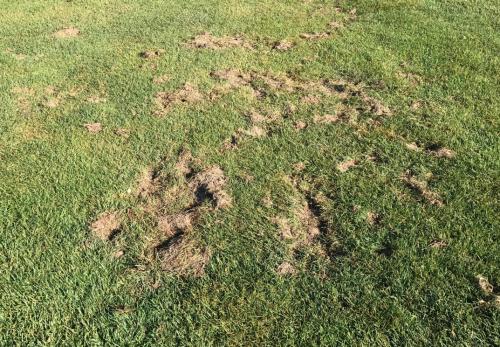 Turf damage from skunks and raccoons digging for grubs.

During fall, Sevin or Dylox can be used to control Japanese beetle and European chafer grubs in turf. Sevin should only be used if the soil pH is less than 7.8. New research on the pathogen we introduced to control Japanese beetles indicates that infestations of Japanese beetle in Kalamazoo, Battle Creek and much of the greater Detroit area have declined by 75 percent as the pathogen built up from 2001 to 2016. We are now distributing infected beetles to the rest of the state.

European crane fly populations have built up to damaging levels in much of the greater Detroit and Grand Rapids areas, with a big emergence of crane flies reported by many in late September 2017. After leatherjackets, the larvae of the crane fly, are found in October, treatments can be made to prevent most of the crane fly damage expected in late October and next April and May. October treatment options include insecticides with the active ingredients bifenthrin, carbaryl, chlorantraniliprole, imidacloprid and trichlorfon.