How did Rome apples respond to Promalin after the 2017 spring frost?

Results of a common post-freeze practice on commercial Rome apples in 2017.

Promalin, manufactured by Valent BioSciences, is commonly used by apple growers after freeze events that occur during bloom to promote fruit set from damaged flower tissues that would not otherwise survive to set a crop. This product contains two distinct gibberellic acids, GA-4 and GA-7, as well as a cytokinin, 6-Benzyladenine. These three plant growth hormones are designed to promote various elements of cellular division in plant tissues, leading to higher survivorship of freeze-damaged blossoms.

While this product has been on the market for over 20 years, the unpredictable nature of spring freezes makes replicable study on the outcomes of this product difficult. As a result, we have only scattered experiences as an industry in understanding how this product behaves on specific apple varieties, and what degree growers can expect to see benefit based on the severity of the freeze event.

Following the freeze events during bloom on May 8 and 9, 2017, this product was used by many Michigan growers in efforts to combat damage to the apple crop. Following these applications, four apple varieties at commercial sites in west central Michigan were followed through the growing season and compared with controls at the same locations to measure effects on fruit set, diameter, mass, color, russet, seed count, average seed number and incidence of parthenocarpic fruit. Rome, Idared, Red Delicious and SweeTango were the selected varieties. 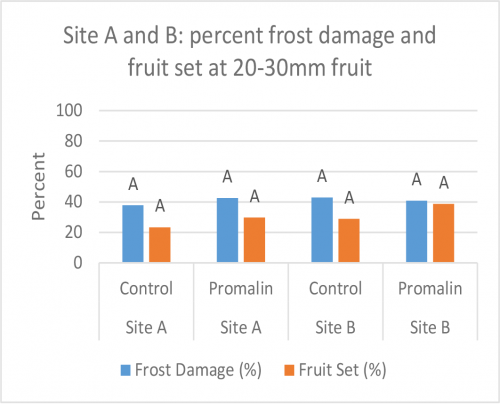 Frost damage was measured on all varieties by cutting open all blossoms on 10 randomly selected branches for each site and treatment, and dividing the number with visible browning of the ovary tissues by this total blossom number. Frost damage was uniform at sites A and site B, indicating any difference observed in fruit set was not due to differences in initial frost damage. 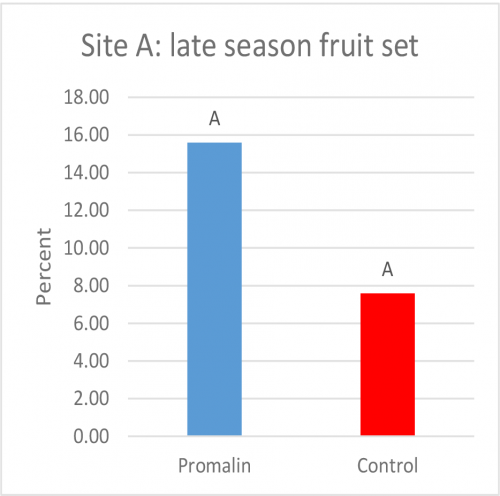 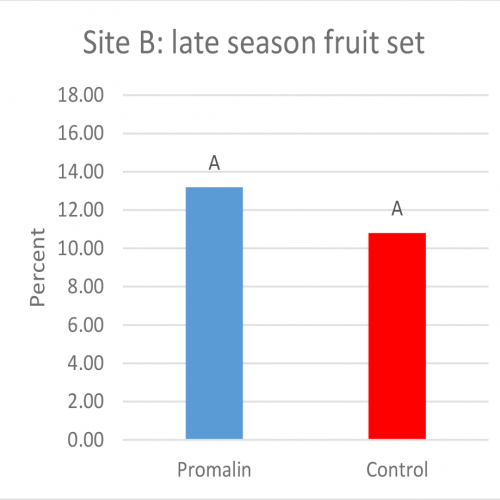 There was a numerical increase in fruit set in Promalin treated Rome at sites A and B. This slight increase is not statistically significant, but was frequently observed over the scope of this work in other varieties. The increase in yield/branch in Rome had high variability, but was typically between 3 and 8 percent on average. However, this very slight increase highlights one common grower comment from this season—it could often be hard to tell by a simple visual analysis if there was a difference between treated and non-treated areas. 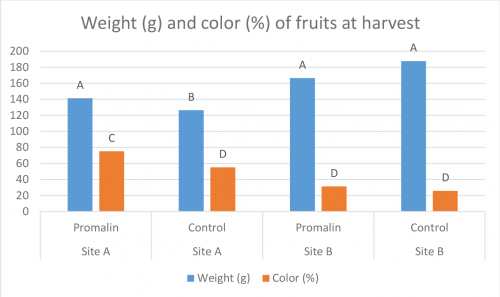 Mean weights for Promalin-treated fruits were higher at site A. While a slight numerical decrease was noted in mean weights at site B, it was not significant. Promalin fruits were more highly colored at site A, while no difference was observed at site B. While results were variable, there was no apparent negative effect of this product on weight or color at either site. 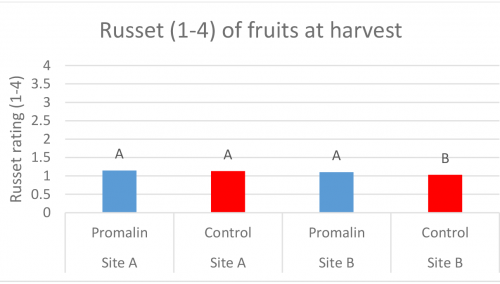 Promalin-treated fruit scored numerically higher in russet rating at both sites, although only one site was significantly different from the control. However, no treatment group averaged higher than 1.5 out of four on the russet scale. Fruit russeting was generally minimal on this variety regardless of treatment group. 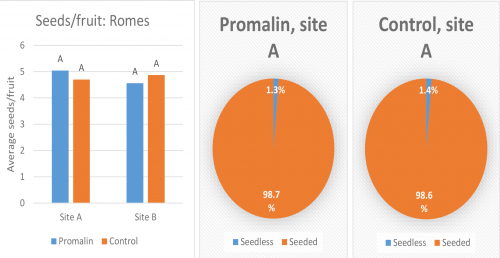 There was not a significant difference in the number of seeds per fruit between the control and Promalin-treated fruits at either site. Individual fruits were also no more likely to be seedless when treated with Promalin.

Promalin resulted in a slight numerical increase in fruit set at both sites (slightly higher yield/branch), but these differences were not statistically different from controls. Promalin application at these sites did not result in significantly different fruit mass or color at harvest, although it did result in more fruit russeting at one site.

Promalin also did not increase the average number of seeds per fruit or the incidence of seedless (parthenocarpic) fruit set at either location in Rome. This finding is contrary to the common grower perception that any increase in yield when using this product is due to the setting of larger numbers parthenocarpic fruit. The Promalin-treated fruits of this variety were no more likely to be seedless than those in the control group.

In general, using Promalin on Rome at these sites did not result in any major negative responses in size, color or weight of harvested fruits. However, there was also not a very strong positive yield response to the product in Rome at these sites either. Average yield increase was less than 5 percent across the two sites, and had high variability.

A grower in this situation may not have viewed the application to have rendered much economic benefit. However, this result is not to say that Promalin application would not be warranted on this variety: Further study of post-freeze applications is still needed. The environmental conditions during and after the freeze play an important role that can be difficult to quantify.