How to care for rapidly growing lawns

Grass is growing vigorously due to frequent rainfall and mild temperatures, and in some instances, lawns are now hungry and nutrient deficient.

Many lawns have been growing non-stop since the snow melted and temperatures warmed. One of the greatest challenges with rapidly growing turf is simply keeping up with mowing so that excessive clippings are not left smothering the turf. The typical once a week mowing schedule may need to be adjusted to try and at least come close to following the one-third rule of removing no more than one-third of top-growth at any one mowing.

Generally, mowing turf when it is wet is not a problem for the turf, but may be a problem for your mower. Some mowers may start to clog up when mowing wet turf, especially if the turf is a little taller than you’d like. Besides issues with the mower clogging, mowing wet turf will dull the mower blade quicker than if you are always mowing dry turf.

In addition to mower issues, and certainly more important in the long run, is the potential to compact the soil or cause physical damage to the turf when turning a mower when the soil is wet or saturated. This of course is of greater concern for those using riding mowers than for a homeowner using a push behind walk mower.

If your patch of turf has constantly been under a rain cloud this summer, the turf may now be colored yellow or brown. There are several reasons for the discoloration, but one of the main reasons is impairment of the root system. It doesn’t take long once the soil is saturated for soil oxygen levels to decline and root hairs to begin to die. Michigan State University Extension notes that as the turf’s root system becomes impaired, nutrient extraction and water uptake will be limited which may also cause yellowing.

Turfgrass may need additional fertilizer as we move through the summer

In the last several weeks, pests that are often associated with low fertility turf have become numerous. Weeds such as black medic and white clover and diseases such as red thread and dollar spot have become problematic in lawns. Although herbicide applications will be necessary in most instances to remove the weeds, red thread and dollar spot can often be “outgrown” in lawn situations when a turf is healthy and actively growing.

Another indication of a hungry lawn is when dog spots are now significantly darker than the rest of the lawn. A dense, healthy turfgrass stand is more resistant to all types of pest pressure, so if it’s looking hungry don’t be afraid to feed it. 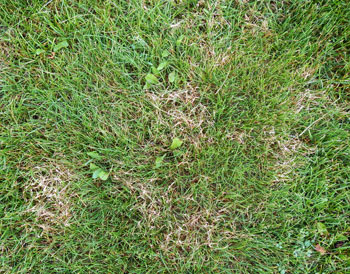 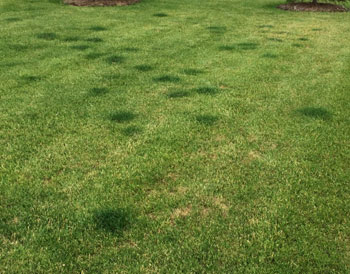