How to remove flying bats from your house

Ways to prevent drama and trauma when dealing with bats indoors. 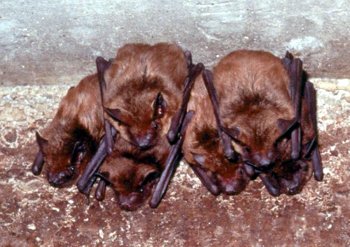 Bats are mysterious mammals to many people. For example, the Germans call the bat “die fledermaus” or flying mouse. But bats are not winged rodents. They are classified as Chiroptera, or hand-wings, a category onto itself. They are the only mammals capable of true flight instead of just gliding. Even those fascinating tidbits don’t change the fact that if a bat gets into the house accidently, there’s still panic. There are ways of managing the event without danger or damage to humans or bats. Many Michigan State University Extension horticulture educators receive inquires during warm weather about how to get bats out of their homes.

Bats can get into your living space several ways. If a window or door without a screen is left open, occasionally a bat can fly in after dark. If a bat is outside resting on the exterior of the house and is startled, it could fly through an opening. A bat could fall down a chimney without a protective chimney cap screen. If bats are living in the attic, one might fall down the wall void between the inside and outside walls and end up in the basement and exit if there is an opening. Bats may look big when flying around, but they can get into or out of an opening about the size of the end of your little finger. Most weigh well under 2 ounces.

It’s a guarantee: the bat is an accidental traveler. It does not want to be in the house or, in many cases, chased by shrieking giants with brooms and tennis rackets. The goal is to find a calm and peaceful ending to their intrusion. Once you are aware of the flying bat, the goal is to get the bat into a room where a door or large window without a screen can be opened. The first job is to put pets like dogs or cats into another room and shut the door. They do not need to be part of the festivities. There is also a small chance that the bat could have rabies, so any contact is discouraged. You also do not need the inside pet running out the open door.

Open the door or window in the chosen room and turn off the lights except for something very dim. Turn off outside lights that are near the open door or window. If an air conditioning unit is running near to the chosen door or window, turn that off, too. Bats use echolocation and not sight to navigate. Close off other rooms by shutting doors or using a sheet and push pins to block the opening. Even though the sheet is very flimsy, to the bat it seems solid. All these activities need to take place in almost complete silence. The more screaming and shouting, the more upset the bat and humans become.

Keep narrowing the flight area with two people holding opposite ends of a sheet up at arm’s length until the bat has nowhere left to fly except through the open door. When people swing tennis rackets or brooms at the bat, it may become aggressive and swoop toward the person’s head. The bat is trying to save its own life. It does not want to get tangled in your hair or have a collision with a large, heavy object like your 8-pound head. If it is necessary to pick up the bat, be extremely careful. Always use heavy leather gloves.

Once the bat has left, close open windows and doors, turn on lights and release the pets. A better solution is to put a plastic container over the top of the bat. Then, slide a piece of cardboard slowly between the bat under the container and the surface that the bat is clinging to. The containerized bat can be removed safely to the great outdoors.

Visit the State of Michigan website for more information on bats and rabies.

You and the bat will be grateful of this peaceful conclusion to the accidental invasion. Bats are champions of feeding on night-flying insects. Now everyone can go back to what they want to do.

Thinking Ahead About Specialty Crop Marketing and Finance