Preliminary reports indicate that putting greens may have been damaged by ice sheets this winter.

The winter of 2013-2014 will be remembered for many years to come. The ice storm of Dec. 21-22, 2013, knocked out power for thousands and coated everything in ice, including exposed turf. Following the ice storm there was a brief warm-up Dec. 28-29 immediately followed by a Polar Vortex, a blizzard and then another brief warm-up from Jan. 10-13, 2014. The weather events resulted in thick ice sheets forming on many putting greens with the most severe conditions appearing to be from the Lansing, Mich., area eastward.

The primary cause of death to turfgrass under ice sheets is from oxygen depletion and toxic gas accumulation from soil microbial respiration. The warmer the soil is when the ice forms, the faster the oxygen is depleted by the microbes and the sooner toxic anaerobic gases like butanol and ethyl butyrate will form. These gases are what superintendents often refer to as the smell of death.

The day estimates for Poa annua survival under ice range from 45 to 90 days and for creeping bentgrass from 90 to 120 days. Currently, many putting greens have been covered in ice for greater than 60 days. Many superintendents have been taking samples from putting greens in the last month to determine whether the turf has been killed and in some cases it does appear the turf was killed.

Michigan State University Extension specialists have sampled Poa annua under a 2-inch ice sheet at the MSU Hancock Turfgrass Research Center weekly for the last three weeks. Last week’s samples from 58 days under ice show that half of the plugs sampled appear to be dead, but we will continue to monitor and sample. Some superintendents have started reporting similar results in the last week. 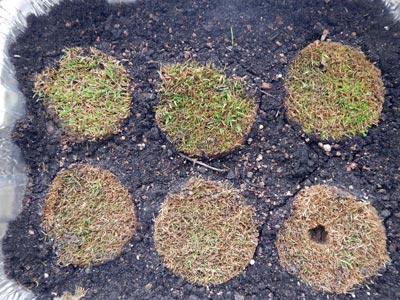 Many superintendents have been active in trying to clear snow and remove ice throughout the winter, but it has been a nearly impossible process due to frequent snowfall and very cold temperatures that make melting or physically removing ice very difficult. This might be the winter that Mother Nature dictates turf life and death no matter what actions were taken by superintendents.

Unfortunately, winter is not over and the upcoming warm temperatures and melting that will arrive can be just as calamitous, especially to Poa annua greens. Poa annua loses its cold temperature, hardy proteins and begins to take up water quickly as temperatures warm. As snow melts and water collects in low lying or poorly draining areas, if the temperature drops below freezing and ice forms, it can crush the swollen crowns of Poa annua plants, killing them. The damage resulting from freeze or thaw cycles is typically referred to as crown hydration injury. Despite efforts to squeegee water from low spots on greens, it is difficult to remove all the water and completely prevent crown hydration injury.

It has already been a very taxing winter and unfortunately spring doesn't look like it will be any easier. We will continue to update the situation as spring arrives.

Dr. Frank’s work is funded in part by MSU‘s AgBioResearch.