Ice sheets have once again formed on putting greens this winter and damage to turfgrass may occur.

The 2014-2015 winter has left many golf course superintendents throughout the northern United States and across Canada coping with ice cover on putting greens. At least in Michigan it is nothing like what we experienced last winter where it was common to find ice sheets several inches thick. This year, it appears that in most cases if ice is present, it is rather thin except in pocketed areas on greens where it may be thicker. Also different from last year is when the ice formed.

At the Michigan State University Hancock Turfgrass Research Center (HTRC) on campus, snowmelt that occurred Jan. 17-18, 2015, when daytime temperatures reached 45 degrees Fahrenheit, resulted in thin – less than 1 inch – ice sheets forming on greens. This ice formation was approximately three weeks later than when ice formed in 2014. On March 2, 2014, greens were already under ice cover for 63 days. Today, March 2, 2015, greens at the HTRC have been under ice cover for 43 days.

Last year, based on sampling turf plugs from beneath the ice sheet, Poa annua at HTRC appeared to survive until approximately 60 days under ice. Samples collected from 60 days started to display damage. Estimates of days of ice cover causing death vary from 45-90 for Poa annua and 120 days for creeping bentgrass. Currently, we are approaching the low day threshold for Poa annua. It doesn’t appear we’ll come close to the day threshold for creeping bentgrass unless this winter endures through April.

I’m also not as concerned with the thin ice sheets as I believe there is a greater chance for porosity/gas exchange with the atmosphere that minimizes anoxia injury as opposed to the thick ice sheets we experienced last year. 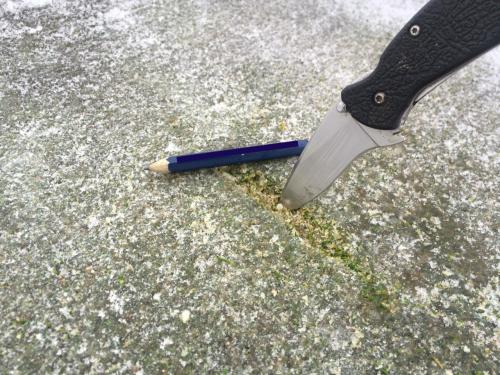 What can or should I do now?

Whether or not to attempt ice removal is a difficult decision for golf course superintendents. The decision to remove ice can be based on several factors including turf sampling or past history, duration of ice cover, current and future temperatures, ability to remove water following melting from the green and labor.

Sampling. Sample greens under ice to assess survival. There is variability in sampling and just because your sample comes out alive doesn’t mean all areas on the green will survive – same can be said if your sample is dead. Also, consider any sampling results from previous years. Did your Poa survive 30, 45 or 60 days?

Duration of ice cover. How many days have your greens been covered in ice? If you’re approaching or have already crossed the 45-day threshold, I’d suggest making plans for removing ice.

Temperatures. Although our local Michigan forecast looks messy the next 24-48 hours with snow/rain/icing being forecast, when you extend out to next weekend the temperatures appear to be favorable for melting. Part of the concern with removing ice is exposing the turf to cold air temperatures. Removing ice can be a difficult decision, but in some ways you’re in a no-win situation. Leave the ice in place and damage can occur, remove the ice and expose the turf to low temperatures and damage is also possible. Personally, I’d hedge towards removing the ice or helping the melt as temperatures moderate.

Melting ice. There are many different products that have been used to melt ice including black sand, dark colored natural organic fertilizers, sunflower seeds and fertilizers. The key to any melting strategy is to be able to remove the water from the green following melting so it doesn’t refreeze and form another ice sheet. If you can remove the snow above the ice prior to the moderating temperatures in the forecast, it’s entirely possible thin ice sheets may melt on their own. Of course I am relying on a 5-10 day forecast (insert your own weather forecast joke here).

Labor. If you’re going to remove ice, you need help. Ice removal is not a one-person job. If your golf course has 18 greens covered in ice, even with several employees helping this is not going to be finished in one day.

Unfortunately, there are no guarantees with respect to winterkill and whether or not ice is removed. The days under ice cover for survival are estimates from research and conditions from course to course and even within the same course vary thereby effecting how long turf can survive under ice.