Knowing which leaves are turning can add to your enjoyment of fall color season.

An old adage in baseball is, “You can’t tell the players without a scorecard.” Knowing who is on the field at each position helps to make baseball games more enjoyable. The same applies to Michigan fall color; knowing which trees are contributing to our fall display adds to our enjoyment of the season. As baseball gears up for its Fall Classic, Michigan State University Extension presents a short guide to the trees that lead the fall color team in Michigan.

Michigan includes a range of diverse forest types that reflect the state’s varied climate and geology. These forest types include a variety of species that have distinctive fall color patterns. In the Upper Peninsula and northern Lower Peninsula, quaking aspen or larch provide vast areas of yellow while maples add splashes of orange and red.

The Upper Peninsula usually kicks off Michigan’s fall color in mid- to late September. In the northern Lower Peninsula, fall color typically peaks in early to mid-October (slightly later near the lakeshores). Fall color in northern Lower Michigan is dominated by maples, especially red and sugar maples. In parts of the state where conifers dominate, the color of scattered hardwoods is often accentuated against the deep evergreen background. Southern Michigan provides the greatest assortment of tree types in the state, as northern hardwood trees overlap with central and southern hardwoods such as sassafras, hickories and black gum, providing a mosaic of autumn colors that often lasts into late October.

Sugar maple (Acer saccharum). When Michiganders think of fall color, chances are sugar maples are the first trees that come to mind. Sugar maples occur throughout the state but are most common in the Northern hardwood forest type and often provide our most spectacular red fall color. They are large trees with large, palmately lobed leaves (think of the maple leaf on the Canadian flag).

Red maple (Acer rubrum). Like sugar maples, red maples are found throughout the state but on a wider variety of sites, including mixed upland hardwoods and swamp hardwoods. Red maples have relatively small, three-lobed leaves and can provide colors ranging from vivid red to orange to bright yellow. Red maples are widely planted as landscape trees in large part due to their fall color, which is reflected in the names of common cultivars such as ‘October glory’ and ‘Red sunset’. 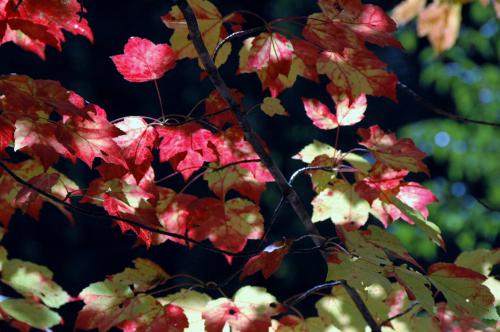 Aspen. Both quaking aspen (Populus tremuloides) and bigtooth aspen (Populus grandidentata) occur throughout Michigan, but are most common in the aspen forest type in northern Michigan. Aspen trees, sometimes referred to as “popple,” provide bright yellow fall color. Trees are characterized by light gray bark and leaves that flutter or “quake” in the wind. 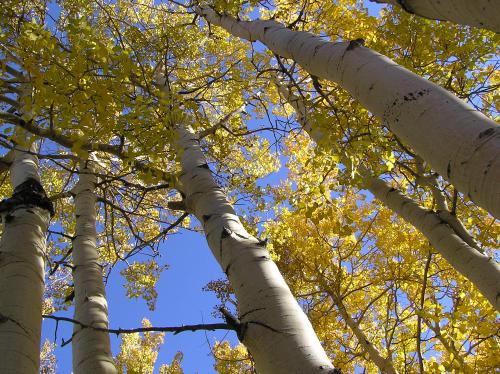 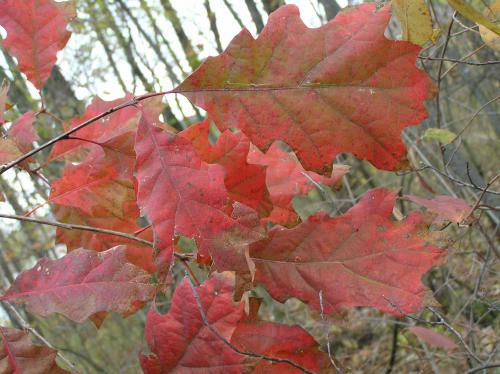 Sassafras (Sassafras albidum) is found throughout southern Lower Michigan. They are easily identified by their leaves, which are sometimes three-lobed or mitten-shaped. Sassafras fall color ranges from yellow to deep red. 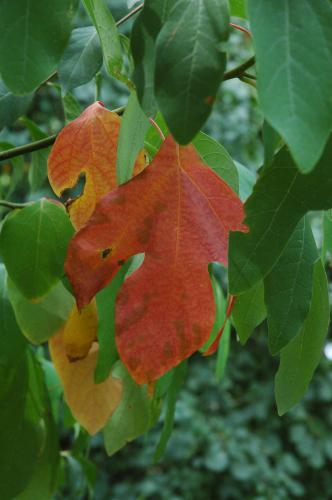 Hickories are common throughout southern Lower Michigan, often producing patches of yellow along roadsides and trails in agricultural regions of the state. Shagbark hickory (Carya ovata), easily identified by its peeling bark, is the most common hickory in the state. Other hickories in southern Michigan include bitternut hickory (Carya cordiformis) and pignut hickory (Carya glabra). 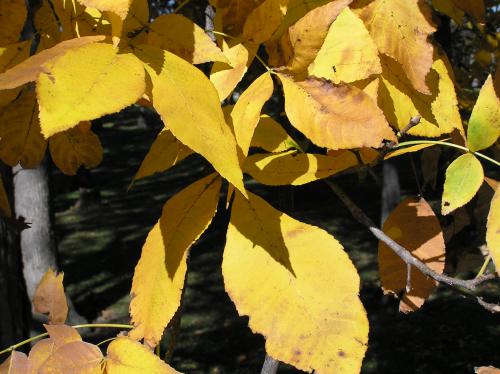 Larch. Eastern larch or tamarack (Larix laricina) occurs primarily in wetter areas throughout the state. Larch trees are the only native conifers in Michigan that shed all their needles each fall. Larch needles turn bright yellow in the fall before they shed. 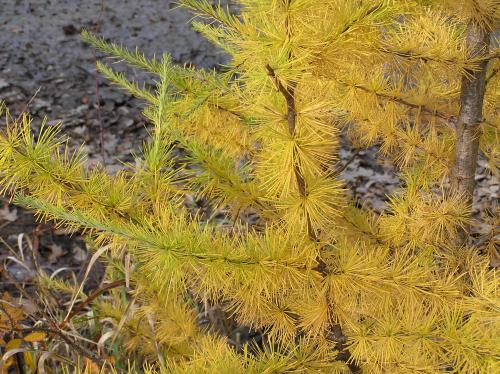 Blackgum (Nyssa sylvatica), also referred to as tupelo, is a small tree that is native to southern Lower Michigan. It is not common in Michigan, but provides spectacular red fall color and is used in landscaping. 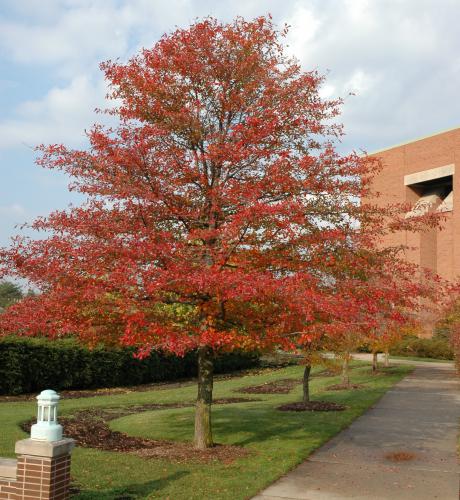 Honeylocust (Gleditisia triacanthos). The northern extent of the native range of honeylocust extends just to the southernmost tier counties in Michigan, however the tree is widely planted as an ornamental throughout the state. Honeylocusts are tough and durable trees that produce bright yellow fall color. 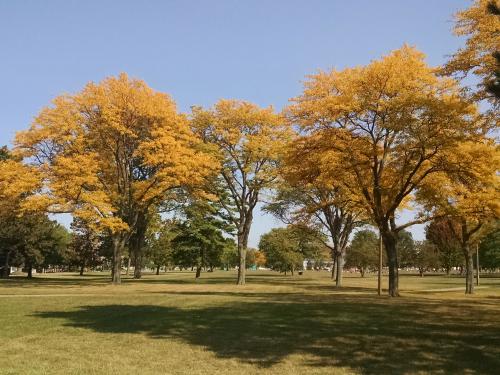 Ginkgos (Ginkgo biloba) are native to China. Even though they have broad, fan-shaped leaves, they are more closely related to conifers than to other broadleaved trees. Ginkgos produce bright yellow color in the fall and are often planted as street trees because of their tolerance of poor site conditions. 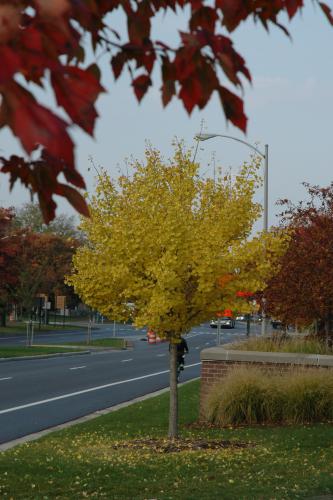 Baldcypress (Taxodium distichum). Like larch, baldcypress is an example of a deciduous conifer (conifers that drop their needles in the fall). Baldcypress is native to the southern U.S. but grows well as a landscape tree in Lower Michigan, producing deep, russet red fall color before needle-shed. 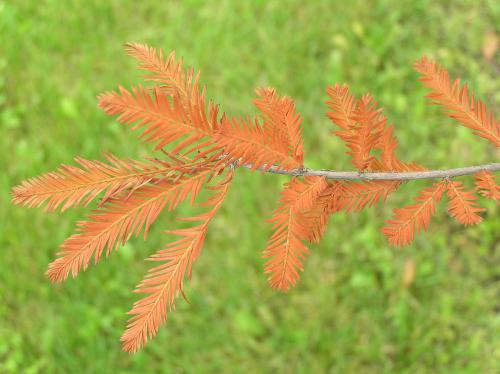 Scarlet oak (Quercus coccinea) is a member of the red oak group with pointed leaf margins. It has a limited natural distribution in Lower Michigan, but has striking deep red fall color and is used as a landscape tree. 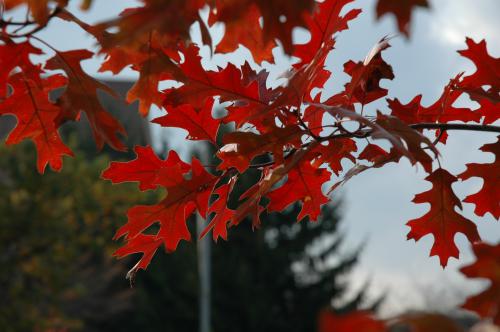 Sweetgum (Liquidambar styraciflua). The native range of sweetgum extends into southern Indiana and Ohio, but it is sufficiently hardy to plant in southern Lower Michigan. It is sometimes mistaken for a maple because of its star-shaped leaves, but is easily distinguished by the hard sweetgum balls that can be a liability when planted near sidewalks. Fall colors range from yellow to deep red or purple. 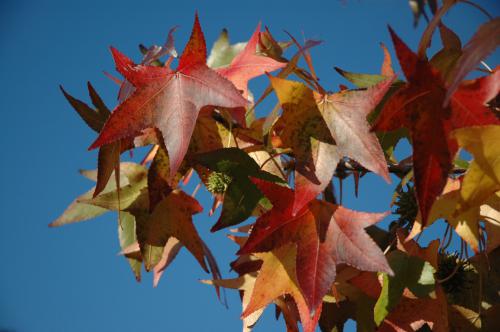 Redbud (Cercis canadensis) is a small, understory tree that has a limited native distribution in the southernmost counties in Michigan. Redbuds are most widely noted for their early spring show of pinkish-purple flowers, but they also provide a pop of bright yellow in the fall. 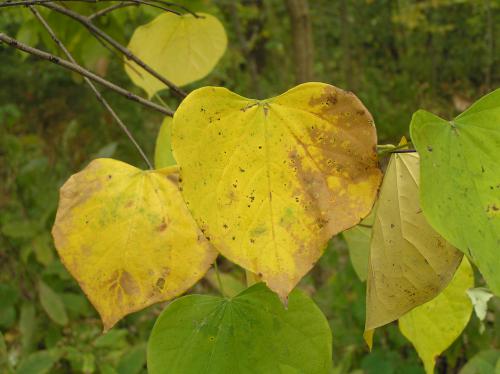 Tulip poplar (Liriodendron tulipifera), or tulip tree, is readily identified by its large tulip-shaped leaves that turn yellow in the fall. This fast-growing tree occurs in southern Lower Michigan and is also planted as a landscape tree. 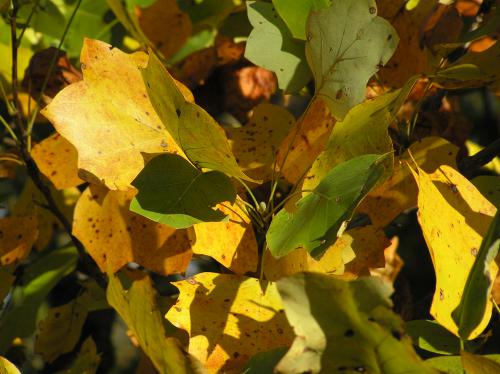