Invasive species in your Jambalaya?

Updated from an original article written by Jane Herbert.

Cajun food lovers may be happy to learn the invasive rusty crayfish has been “demoted” from Michigan’s list of prohibited species to the restricted species list. But what does this regulation change mean for home cooks?

Crayfish, often referred to as crawdads, have been a traditional favorite of Cajun cooks for a long time. For those with a Michigan fishing license, it is now legal to collect or trap the invasive rusty crayfish for home use. The Michigan Department of Natural Resources (MDNR) now allows for the limited harvest and possession of this invasive species for consumption purposes only – a move considered to be a win-win by many.

According to a November 2014 news release from the MDNR, classification of the rusty crayfish has been changed from “prohibited” to “restricted.” This follows the sad conclusion that this invasive crustacean is now considered widespread and naturalized in Michigan. As a result, the Michigan Natural Resources Commission recently approved the revision of state fishing regulations to include the harvest of rusty crayfish.

The MDNR website provides the following information about this aquatic invasive species: “A native of the Ohio River Basin, it is considered a threat to Michigan's native crayfish population, and could have environmental and economic impacts on local areas. The major threat is the reduction of aquatic plant beds and the species that live in these communities. Many fish may lose nesting areas and shelter when aquatic plant beds are reduced.” 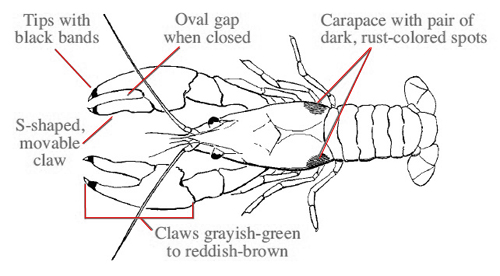 Rusty crayfish can grow up to five inches in length and are voracious eaters – mowing down aquatic plant beds with their large pinchers. There is also some evidence of these invaders feeding on fish eggs and concern about their potential impact on the larval stages of aquatic insects like dragonflies.

As a restricted species, rusty crayfish may be legally harvested and transported (possessed) for domestic use. It is still illegal to sell or offer to sell rusty crayfish, release them into the environment or use them for bait. The movement and utilization of rusty crayfish for bait has been identified as the main vector by which this invader entered Michigan waters.

A previous article from Michigan State University Extension provides information on seven aquatic invasive species recently added to the state list of prohibited species. These include the red swamp crayfish, a large and highly aggressive invader, which may NOT be collected or transported for consumption or any other purpose.

Learn about aquaculture from experts through new webinar series

AFDO/Seafood Alliance HACCP Training Course to be held in December