Is it beech bark disease?

Avoid confusion about this exotic invasion using some basic clues.

Many people have already become aware of the devastating impact beech bark disease is having in the eastern Upper Peninsula and northern Lower Peninsula. Since the pathogen was first detected in Michigan in 2000, it has quickly spread to other forested areas that contain a beech component.

Beech bark disease is a fungus spread via a scale insect. Specifically, at least two different species of nectria fungus (accidentally introduced to the U.S. via European nursery stock in the late 1800s) is introduced into susceptible beech trees via the beech scale, a tiny sap-feeding insect that pierces the thin bark of the tree. The fungus introduction results in canker development that eventually cuts off the flow of water and nutrients, killing the tree over the course of a few years. The widespread death of beech stands in the state have led to “beech thickets,” which occur via dense sprouting from the roots of the dead parent trees.

The telltale sign of beech bark disease infestation is the appearance of a fuzzy, whitish coating on the tree’s bark and branches. This is the wooly, waxy coating that covers the bodies of the scale insect. Unfortunately, there is no known way to prevent the spread of the disease in forested settings, although there do seem to be some trees that appear to have natural resistance to the fungus. For more details on beech bark disease, Michigan State University Extension’s bulletin Biology and Management of Beech Bark Disease

Other things may be mistaken as beech bark disease, but are actually other agents that are usually not as disastrous. Sometimes observers notice white patches on the trees, which are actually lichens. Fortunately, there is no proven link between lichen growth on beech trees and tree death.

Insect feeding of a different sort can result in a beech tree having certain “fuzziness” on its branches or trunk. The color of this “fuzz,” however, is usually much darker than what is found from the scale insect that carries beech bark disease. It may look like unusual dark streaks or blobs on mature beech trees. The cause of these fuzzy streaks may be the result of a different insect: the beech blight aphid. Just like the beech bark disease-based scale insect, these aphids crowd together on major branches or other parts of the tree to feed on the sap. Since the beech blight aphid does not carry a nectria fungus infection, however, these insects rarely kill mature trees. 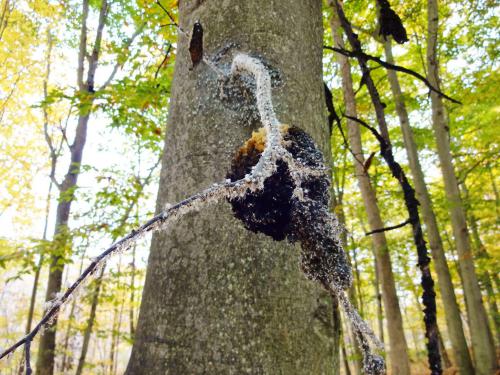 Beech blight aphids excrete a ‘honeydew’ that attracts a sooty mold fungus. This fungus does not harm the tree. | Photo by Nicholas Sanchez

Beech blight aphids are also larger than the scale insect. They sport white, wooly hairlike filaments on their posteriors. As they feed together, they excrete what is called honeydew that accumulates on the bark or base of the tree. A sooty mold fungus then grows where these aphid “deposits” are found, thus creating that fuzzy dark effect. One of the more curious characteristic of this aphid is that it will wiggle its white posterior when threatened. A colony of these wiggling aphids can make quite a scene. A YouTube video hosted by Capital Naturalist demonstrates this effect. This quirky behavior gives these aphids the more colorful name of the “boogie-woogie” aphid.

If you do suspect that your beech trees show recent signs of the beech scale that carries the more deadly beech bark disease, feel free to report it using the Midwest Invasive Species Information Network (MISIN) website. At the top of the web page, click on the “report sightings” tab to get started.