It's summertime, and the deer are coming for your feed

Think you don’t need to worry about deer getting into farm feed this summer? Think again! The risk is high, especially at this time of year.

Summertime, when the forage is lush and there is no shortage of growth, is the time of year when deer may be coming to farm-stored feed the most. It seems counterintuitive, but maybe it is a reasonable expectation.

Deer movements were studied by scientists with USDA National Wildlife Research Center and Michigan State University using deer collared with radio transmitters. Deer for this study were captured near six farms in the core tuberculosis (TB) area of Michigan, and their movements, relative to the farms, were tracked. Data points for deer incursion to stored feed on these farms were plotted by month of the year (Figure 1). 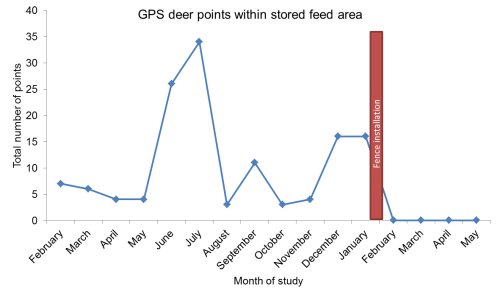 As expected, there were more visits by deer to farm-stored feed in the winter (December and January) than in the fall or spring seasons. But what stood out in the data was that deer incursion to stored feed on these farms was over twice as great in June and July than in the winter.

That seemed to defy logic. It even caused some to ask if there was something amiss in the project design. But that may be because we were not thinking about the needs of the deer.

As an educator with Michigan State University Extension, we recently discussed this with a farmer while visiting to talk about wildlife risk. He speculated that whitetail does may seek out stored feed in response to increased nutrient needs for nursing fawns. Let’s run this through a calendar to see if it makes sense of what the research showed.

The rutting (breeding) season in Northern Michigan is typically October through December, and while there is variation, the peak of breeding activity may be late October through mid November. Gestation length for whitetail deer is 200-205 days, meaning that most fawning occurs late May through June. Then, does are nursing their fawns for 10-16 weeks of age, or May through August.

The nursing fawns receive their primary nutrition from milk for about the first month. Rumination in fawns begins at around two weeks of age, and they begin to supplement their milk diet with forage. This is a time of high nutrient demand by the nursing does. All this occurs during a time of increased forage availability in the wild.

However, some deer will have found stored feed on farms and, we can speculate, learned it to be nutrient-dense and consistent in quality. Even though feed is available in fields and forest, they may have become habituated to farm-stored feed and continued to seek it to meet the high nutrient demand.

There may also be other reasons that deer seek out farm-stored feeds during those early summer months. They may be seeking refuge from predation after fawning, seeking different water sources when others decline and simply taking the easiest feed when feed storage gates are left open by farmers during harvest time. Taken together with what is happening with deer nutrient needs, it may not be surprising that visits increase in June and July.

Factors leading to increased deer pressure are a good reminder to be vigilant in monitoring and protecting stored feed from deer this summer. A discussion of that appears in a companion article “Protecting farm feed from deer.”

Why does that matter so much? It matters because TB infection of cattle herds is at stake. TB can be transmitted indirectly between infected members of the wild deer herd to cattle, or vice versa. Transmission of the disease occurs mostly likely when saliva is deposited on feed and then that feed is consumed by another while the bacteria is still alive.

The time that the bacteria will live varies by season, moisture conditions, shade or sun and other factors. In the summer, it might be from several hours to weeks. That is a critical time period when cattle could become infected from eating contaminated feed. Breaking the cycle of TB means breaking the cycle of deer getting into cow feed. Please look for the companion article “Protecting farm feed from deer” and take steps now.