Keep an eye on foliar and fruit diseases in grapes

Most grape growers have done a good job controlling diseases in grapes, aided by the dry weather in June. However, rainfall has increased but has been quite variable, with some areas like northern Michigan getting more rain than others. It is therefore difficult to make blanket recommendations for disease control in grapes.

Black rot is currently becoming apparent on fruit, showing creamy spots surrounded by rapidly advancing brown areas and shriveling of the berries. If you see black rot symptoms, it is too late to rescue the affected berries or clusters; however, since there may still be additional infection periods during rainy weather, any fungicides applied now will protect healthy berries from new infections.

Basically, six hours of fruit wetness from rain or dew at 80 degrees Fahrenheit is sufficient for the fungus to penetrate the fruit. Sterol inhibitors like Tebuzol and Rally are very effective against black rot and have some “kick-back” (curative) action, but no more than 24-48 hours.

One of the most active sterol inhibitors is difenoconazole, an ingredient in Revus Top, Quadris Top and Inspire Super, which may be applied for broad-spectrum disease control at this time of the season. Be careful with these products on rapidly growing plant tissues, which may have a thin cuticle, allowing too rapid uptake of difenoconazole and subsequent burning of leaves. Also, do not apply any products containing difenoconazole to Concord, Concord Seedless or Thomcord grapes.

Phomopsis spots are visible in most Concord and Niagara vineyards, and may be especially plentiful in Vignoles and other susceptible wine grapes. However, they do not seem to be increasing much. Most Phomopsis infections occurred earlier in the season, as can be seen from the preponderance of lesions on the first and second internodes and older leaves. 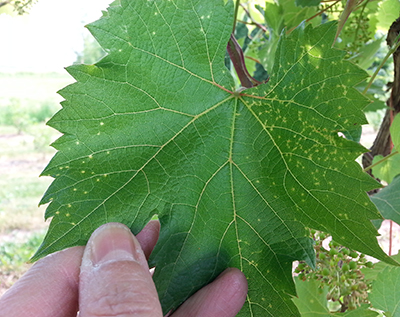 Phomopsis lesions on leaf are yellow spots with brown speck in center.

Similarly, anthracnose was also favored by spring rains, and lesions can be found on stems, leaves and berries of table grapes (e.g., cultivars Mars and Marquis) as well as Marquette and Frontenac grapes. Anthracnose may look like a severe case of Phomopsis but unlike Phomopsis, lesions are sunken on stems and develop shot-holes on leaves. 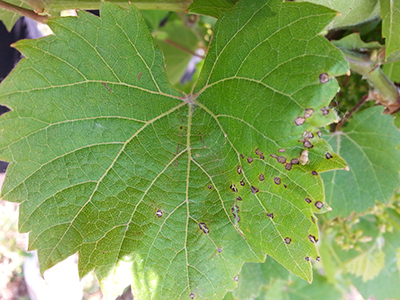 While berries remain susceptible throughout their development to Phomopsis, the risk of infection diminishes after bunch closure because spore supplies become exhausted, especially in rainy years. Only young berries are susceptible to anthracnose.

Downy mildew started to show up on leaves in various vineyards about two to three weeks ago. Unsprayed cv. Chancellor has had an intermediate number of infected clusters compared to previous years, probably moderated by dry conditions. 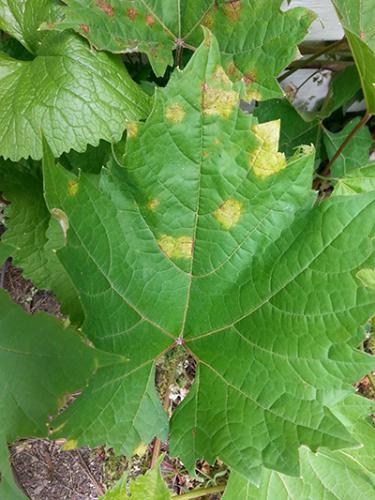 Rainy weather, especially with warm, humid nights—which promote spore development—will be conducive to downy mildew, so continue to be on the look-out for this disease. When downy mildew is observed, take action soon since the disease can spread rapidly and cause premature defoliation of the vines.

Apply Ridomil Gold Copper, which has a 42-day pre-harvest interval (PHI), to eradicate downy mildew. If harvest is well over two months away, you can also apply Ridomil Gold MZ, which has a 66-day PHI. Remember that juice grapes for Welch’s cannot have any mancozeb applied to them after bloom.

Alternatively, use phosphites fungicides such as Phostrol or ProPhyt to eradicate tdowny mildew by applying the highest labeled rate followed by a “booster” spray five days later. With phosphites, be careful under hot, dry conditions, as they can cause leaf burning when vines are drought-stressed.

Generally, it is a good idea to incorporate protectants such as strobilurins, copper, Ziram, Ranman, Forum or Presidio in the fungicide program as well to keep downy mildew under control.

Powdery mildew has been seen on clusters and leaves in some locations, for instance on clusters of unsprayed Chancellor vines in East Lansing, Michigan, showing that the pathogen has been active for some time. Warm, dry spells are especially favorable for powdery mildew, although intense solar radiation is harmful to the fungus.

Continue protecting leaves and clusters, preferably with a tank-mix of a systemic and protectant fungicides. Don’t rely entirely on systemic fungicides for powdery mildew control since fungicide resistance is a real possibility in powdery mildew.