One Michigan grower responded to his customers’ desire to learn how to make sauerkraut, and developed an event to teach them that is still going 12 years later.

Long after the last pumpkin is carted off in a family’s wagon with donut holes and caramel apples, and long before the first quart of juicy u-pick strawberries get smeared across a toddler’s face in June, George VanHoutte of Macomb County has hit upon another great family attraction at his farm: sauerkraut. The tart cultural food is fun to make and eat.

VanHoutte and his employee, Wayne Bondy, came up with the idea 12 years ago when customers asked how to make sauerkraut with the winter white cabbages that hit the farm stand late in the season. Instead of just handing out a recipe, they decided to invite everyone out to learn together, for free. They chose the second Saturday of January, when things finally slowed down at the farm, and the kraut makers liked the post-holiday timing too. They decided to make kraut pounders from four-by-fours and PVC tubing, and encouraged bringing a dish to pass and BYOB: Bring Your Own Bucket. Twelve years later, VanHoutte’s free community event keeps bringing in new kraut-makers. 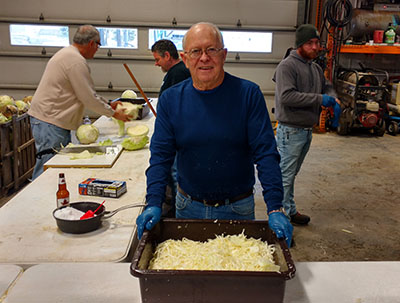 Wayne Bondy, one of the creators of the event.

The process for making sauerkraut is simple. Cabbage is peeled until the head is clear of any blemishes. Then, it is cut in half, cored and thinly sliced. Next, kosher salt is added at a rate of 3 tablespoons per 5 pounds of cabbage. Then, a couple of inches of the salty mixture is added to the bottom of a crock or bucket and pounded with a wooden baseball bat or mallet until juicy.

Once the desired amount of cabbage has been added and smashed, a plate and stone or brine bag is placed on top to hold the cabbage underneath the surface of the salt brine. It cures in the brine for a few weeks before it is ready to eat. Michigan State University Extension recommends letting the kraut cure based on the ambient temperature of the room. Once ready, some of VanHoutte’s regular kraut-makers will leave the bucket in their basement and scoop the kraut from it all year long. Other will can or freeze it in smaller portions.

There have been a few improvements over the years that VanHoutte thinks has ensured the continued success of the event. For the first few years, he used a line of mandolin-style slicers to slice the cabbage, and was halving the cabbage heads with large kitchen knives. However, they were a hazard to fingers. So, he bought a commercial electric cabbage-slicer, and assigns one person to run it for the whole day. He also made safer chopping jigs for cutting cabbage in half. The cutting now goes a lot faster, and the process is safer for everyone. 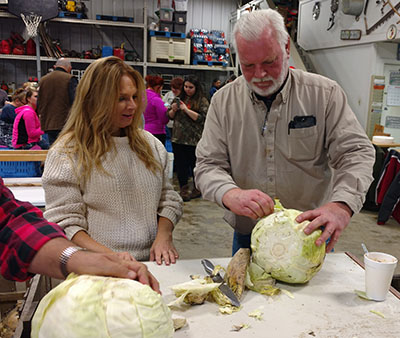 VanHoutte also credits his strong relationship with the produce pack house and broker, Mike Pirrone Produce Inc. of Capac, Michigan, as an important factor in their success because they let him use their refrigerator rooms to keep the cabbage in good shape for the event.

The event used to start at 6 p.m. and go into the night, but for the last three years VanHoutte changed the start time to 12 p.m. so more families could come with their children. Pounding out 5 gallons of cabbage takes at least one hour, but goes faster by rotating a team of pounders. It gets harder to smash freshly-added cabbage when the mixture gets deeper. So one technique is to only pound fresh cabbage in a shallow layer in one bucket, like a mortar and pestle, and dump it into a second collecting bucket once it gets juicy.

VanHoutte advertises through word-of-mouth primarily, and sometimes the local news outlets pick up on it as well. His biggest attendance was 500 people in 2013, and they went through 11 crates of cabbage that day. This year, they went through eight crates. At $70-$80 wholesale, or $100-$130 retail per crate, VanHoutte said the event has become a loss leader that he recoups in the summer at his farm stand on M-53.