Will June beetles create a problem in your turf? Some considerations and what to do about it.

In the last week, people all over Michigan, but more so in the northern Lower Peninsula, have been finding large, (0.5 to 0.75 inches long) dark brown beetles on driveways, sidewalks and decks in the evening or early morning. These are adult June beetles, a common name given to all the beetles in the genus Phyllophaga. Because they tend to fly at dusk and are attracted to lights, you may hear these large beetles “clunking” as they bang into windows at night.

The adult beetles feed on tree leaves in late May and June before mating and depositing eggs in the soil (Photo 1). The C-shaped larvae, often called white grubs, feed on the roots of trees, shrubs, turfgrass, garden plants and sometimes corn and other agricultural crops. A large flight of adult beetles means that the females will be laying eggs in June and July. Small, C-shaped white grubs will hatch from the eggs and begin feeding on roots in July and August, growing to a length of about 0.5 inches long by September. 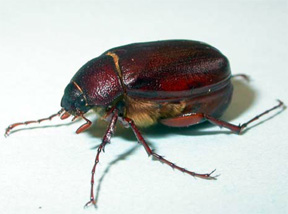 These larvae will continue to feed and grow for two more years, sometimes causing turf injury in the second and third summer and fall (Photo 2). More problematic is the extensive damage caused by skunks or raccoons when they dig turf to find the juicy grubs (Photo 3). Since June beetles are native to Michigan predators, parasites and pathogens usually provide good biological control. But even with good natural enemies, hotspots may occur where enough grubs are present to attract skunks and raccoons. If you are in a location where skunks and raccoons are active, and if you have seen a lot of June beetles, you may want to consider protecting home lawns with an insecticide that contains one of the following active ingredients: imidacloprid, thiamethoxam, clothianidin or chlorantraniliprole. These products must be applied by July 1 for optimum protection against June beetle grubs. For more details on management of white grubs in home lawns, see the article by Terry Davis posted on the MSU Turfgrass website, Home Lawn Grub Control Products 2011. 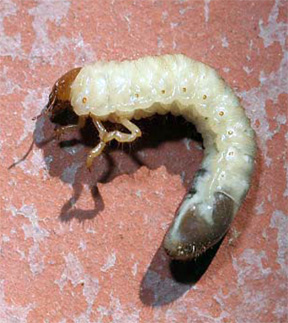 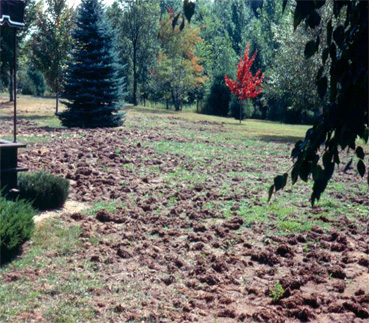 If you don’t have a problem with skunks and raccoons, then the best way to protect your lawn is by setting your lawn mower to the highest cutting height. By letting your turf grow taller it will produce a much larger mass of roots that are more tolerant of grub feeding. If you raise the mowing height and water during dry periods, it is very unlikely that you will see any grub damage in your lawn, even without using any insecticide.

A large flight of adult June beetles this year means more grubs this fall and in 2012 and 2013. Large June beetle grubs are difficult to control with an insecticide. The best way to prevent skunk and raccoon damage is applying a product that contains imidacloprid, thiamethoxam, clothianidin or chlorantraniliprole before July 1. If you already use one of these products on tees, greens or fairways, you will be protected from June beetle grubs. If you also want to protect some of your rough, use a granular formulation that remains stable until it rains.