Damage may appear dramatic at first, but long-term prognosis for most plants is good.

As expected, our record-breaking warm temperatures back in March promoted much earlier than normal development of trees and shrubs in landscapes, nurseries and Christmas tree plantations throughout Michigan. This early growth spurt set the stage for text-book examples of late frost injury (damage caused by freezing temperatures in late winter or early spring) once weather patterns returned to normal. In mid-Michigan, many landscape plants were able to escape injury from several fairly mild frosts that occurred during April. In fact, some early flowering trees that are frequent victims of late frosts, such as star magnolia, actually gave a better-than-average show this year because they managed to complete their bloom cycle before getting frosted.

Our situation changed dramatically, however, during the last weekend in April. Following that freeze we have seen widespread damage to “the usual suspects” – trees or shrubs that typically break bud early and therefore are susceptible to frost damage. For conifers this includes black hills spruce, Douglas-fir, concolor fir, and balsam fir. Among deciduous trees and shrubs we have seen damage on sycamore, Planetrees, lilacs and honeylocust. 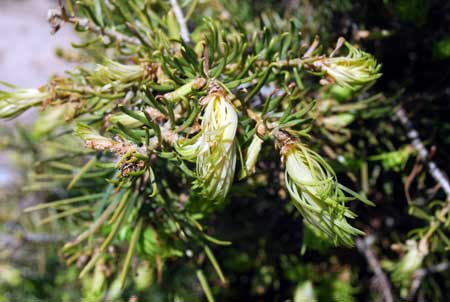 For growers, this damage impacts production due to growth losses and loss of quality since damage to newly emerging shoots can affect tree form. Some nursery growers were successfully able to reduce frost injury to their crops by irrigating or covering with frost blanket fabric during freeze advisories. With frequent advisories throughout April, nurseries applied frost protection up to eight times. One seedling nursery producer learned the value of frost protection from damage that occurred on the edges of his irrigation spray patterns, which were not adequately protected (see Photo 2). 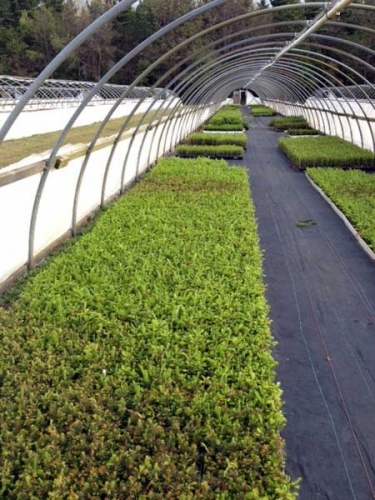 Another concern for growers is the ability of trees and shrubs to recover from repeated frost events. In most cases, trees will continue to push new growth, but the overall loss of growth is cumulative and the need for corrective pruning to maintain good form will increase.

Likewise, for homeowners it is important not to panic when they see extensive frost damage to landscape plants. Late frost damage can often be dramatic, with entire trees or shrubs covered with brown or black shoots. It’s important to remember that vigorous plants have ample energy reserves and will quickly push new growth. For deciduous plants that are prone to late frost damage, we often see plants suffer extensive shoot die-back, but then appear essentially normal by mid-summer.

A disconcerting aspect of our outbreak of frost damage are reports from Detroit suburbs that unscrupulous tree service or landscape companies are exploiting the situation by trying to convince homeowners that frost-damaged trees are diseased or require treatment. Homeowners with frost damaged trees need to keep two things in mind. First, late frost damage may be unsightly, but is rarely life-threatening for trees and shrubs. Second, it’s always a good idea to be wary of “doorknockers” that arrive, uninvited, claiming to diagnose tree problems. Professional, reputable tree care companies rarely, if ever, go door-to-door soliciting business. Homeowners looking for help with the trees and other landscape plants should check the yellow pages or the web for companies that are affiliated with professional associations such as the International Society of Arboriculture, Arboriculture Society of Michigan, Michigan Green Industry Association or theMichigan Nursery and Landscape Association.