Updated from an original article written by Jan Fierro.

October 15, 2021 will mark the 13th United Nation’s annual day of recognition of international rural women. The United States Agency for International Development (USAID) has long understood the importance of women in developing resilient solutions that lift communities and put them on the road to self-reliance.

President Joe Biden further echoed this sentiment through an Executive Order on Establishment of the White House Gender Policy Council. The order signed in early March recognizes, “the full potential of all people – including women and girls – across all aspects of our society is essential to the economic well-being, health, and security of our Nation and our world.” It further declares in Section 2 (b)(x) to, “advance gender equality globally through diplomacy, development, trade, and defense.”

The Feed the Future Innovation Lab for Legume Systems Research, funded through the USAID Feed the Future initiative, is a focused on building inclusive, nutrition security and resilience guided by the USAID Global Food Security Strategy (GFSS).

Recognizing and elevating the potential of women in achieving food security and improving nutrition, the Legume Systems Innovation Lab through a variety of research partnerships and initiatives is aiming to reduce gender inequalities that undermine performance of the legume systems globally.

Gender is one of five cross cutting themes that is addressed by the lab’s Resilience Resource Team (RRT).

“Research shows that women farmers often do not have access to land and inputs, training on new technologies, and markets for sale of products. Across the value chain, limitations exist for women as traders, as formal sector processors, and as researchers,” explains Allen.

“I work with project leads to develop gender responsive impact pathways towards improved economic status, nutrition, and agricultural productivity for women and men stakeholders. Our gender focused research and capacity building activities enhance gender equitable participation and greater resilience to shocks for both women and men.”

“Agriculture contributes to nutritional outcomes in many ways, and women can play a role in ALL of them acting as key entry points to leveraging agriculture for improving nutrition. However, it is estimated that 60 percent of the world’s chronically hungry people are women and girls,” explains Thiagarajan. “There is growing body of evidence that nutrition-sensitive agricultural interventions are much more effective when they are combined with those seeking to address gender inequality and women’s empowerment.”

In celebration of the International Day of Rural Women, the Legume Systems Innovation Lab would like to reflect on three women who have impacted us through their perseverance, strength, and resolve.

Neem, seeds of opportunity for the women of Niger

Legume Systems Innovation Lab supports research on integrated pest management through a project led by Dr. Manuele Tamò from the International Institute of Tropical Agriculture (IITA) in Benin. This project has led to women’s empowerment in Niger through the development of community-based neem production units which turn seeds from the common neem tree into natural pesticides which the women can use in their field or sell 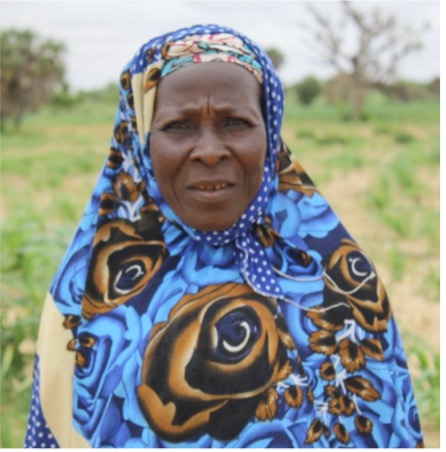 “My knowledge in the ecological management of pests has grown and so has the cohesion between our unit members and the producers,” says Indo Maman. Indo, a widow from the village of Danja in the Madarounfa Department became involved in the program through the women farmer’s cooperative. Her main job is in the threshing of the Neem grains, but Indo has big dreams. “I would like to organize advertising campaigns and market the tea bags on a larger scale, I dream to see the unit to be a big company.”

Indo’s grandsons begin their day energized by breakfast at school, an expense she has been able to pay through her involvement in the neem pesticide production. She has also been able to pay her grandson’s extra school fees and buy school supplies. 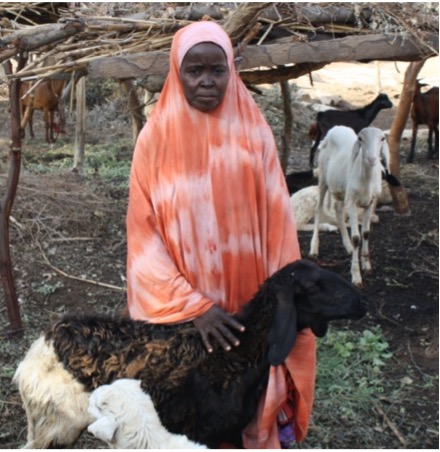 Aicha Mahaman, 55, is from Mai Ganga village in the Mayahi Department. “My role is in processing neem kernels into flour,” Aicha explains. She also shares Indo’s dream of one day building a neem processing company. “I believe producers will be ready to pay (for) the neem tea bag if affordable and (they) are well sensitized about the safety and effectiveness in reducing the population of cowpea pests.”

Aicha Mahaman purchased clothes for herself and her children, but the sheep she acquired will provide much return for the entire family. 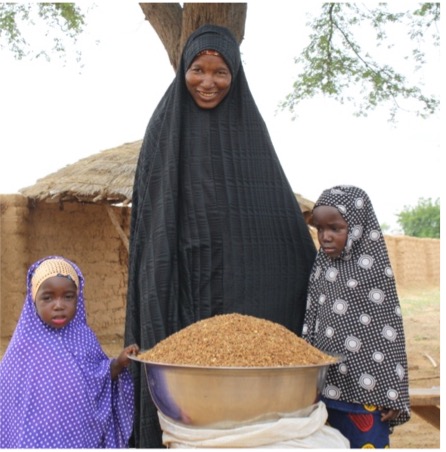 As president of the Farmer’s Cooperative in the village of Serkin Hatsi in the Guidan Roumdji Department, 43-year-old Sa’a Moussa was the initiator of the women’s organization. She participates in the neem processing through the packaging of the product. “The activity is profitable not only because it generates income, but I have been able to weave relationships with other villages,” says Sa’a. “I would like to see this industry grow.”

Sa’a Moussa purchased fertilizer to grow her crops strong and bought clothes for her grandchildren.

United Nations observances are designed to bring awareness of issues of global importance and provides an opportunity for groups to advocate on their behalf.