Allowing livestock to graze and forage amidst protected wildlife disrupts wildlife already struggling for survival – and that different wildlife react to livestock invasions in different ways.

The story of wildlife conservation is usually framed as man vs. treasured wildlife. But there’s growing evidence that the narrative deserves to have leading roles for livestock such as sheep, yaks or cows.

A group of researchers from Michigan State University (MSU) and China are building the case that allowing livestock to graze and forage amidst protected wildlife disrupts wildlife already struggling for survival – and that different wildlife react to livestock invasions in different ways. The work is published in the most recent edition of Biological Conservation.

“We are continuing to understand how to strike a balance between letting humans make a living while protecting wildlife in the same coupled human and natural system,” said Jianguo “Jack” Liu, director of MSU’s Center for Systems Integration and Sustainability and one of the paper’s authors. “The balance is dynamic, as shown in China – where giant pandas are protected –people are challenged to find new ways to prosper, and new situations emerge. Such dynamics need to be routinely built into conservation across the world.”

What happens when sheep roam in panda land

The latest findings continue the exploration of the largely unknown impacts of allowing livestock to graze and forage in forests on which fragile wildlife depend. The competition and damage livestock present can disrupt animals already struggling to hold their own. Three years ago, this research group discovered that the horses that farmers introduced to the forest for extra income in effect shoved pandas away from the bamboo buffet in the Wolong Nature Reserve in southwestern China, the famed home of the vulnerable giant pandas, as well as other threatened wildlife.

The knowledge spurred forest managers to change the rules and get horses out of prime panda habitat. 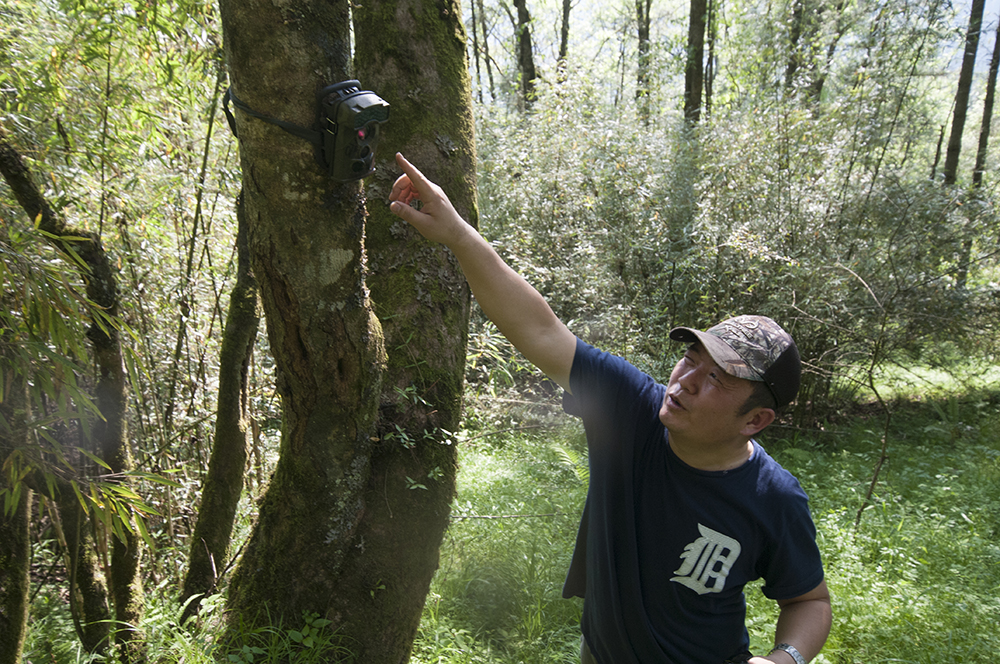 But other livestock are still there. Beginning in 2011, research associate Jindong Zhang and his colleagues were using motion-detecting camera traps to document the movement of animals in Hetaoping, a roughly 15 square-mile area in the northeastern portion of the reserve. They focused on an area with a stream, which is crucial to a wide variety of animals, especially in the winter. Midway through their four-year study, there was a change in policy in the reserve and residents there were encouraged to allow livestock to graze there.

Suddenly, sheep, yaks and cows were wandering into the camera’s range.

And the giant pandas, red pandas and golden snub-nosed monkeys started to disappear, but in different ways. Sambas – a type of deer – still showed up for pictures, but shifted to evening hours, presumably to dodge the livestock.

From this tableau that evolves over 1,588 photos, researchers deduct that it’s not just that the wildlife may be affected by their less rare and more domesticated forest mates, but that they react differently, and thus need different types of policies.

“Usually, several species of wildlife live in a forest habitat, due to their biological traits like life history, strategy and diet, and their responses to livestock introduction are different too,” said Zhang, who also is an associate professor in China West Normal University. “Researchers and managers should consider comprehensively the divergent needs and behavioral responses of those protected animals to livestock and other human activities. Just focusing on a single species might mislead the managers to implement policies that protect one species at the expense of other species.”

The giant pandas, which wield the greatest clout in wildlife management privilege, and red pandas left the valuable real estate to the livestock, likely because both need to camp out in one place to plow through the massive amounts of bamboo they require to survive. Zhang said fecal analysis indicated the giant pandas shifted to nearby areas that were less desirable, so it appeared the livestock were forcing them to downgrade their living conditions.

For the monkeys, it appeared easy to just hop over to quieter tree stands, since their population isn’t dense there, and food readily available. The sambars elected to put up with their new neighbors, but opted to graze in evening hours when the livestock would have called it a day.

The sambars’ behavior had been seen years earlier, when CSIS-member Neil Carter found that tigers in Nepal shifted their movements to the night to avoid human disturbances.