Making Your Message Heard: My Experience with ComSciCon

On a sunny weekend this past August, I journeyed into rival territory. Myself a tried-and-true Spartan, I made sure to hold my head a little higher as I entered the University of Michigan campus and strode toward the Rackham School of Graduate Studies. However, the closer I got to my destination, any feelings of rivalry were replaced with eager anticipation of what was about to transpire. I was on my way to a much-awaited workshop: Michigan’s inaugural Communicating Science Convention (ComSciCon-MI, for short).

This intense, graduate student-organized workshop began in 2013 as a collaboration between Harvard and MIT, with the purpose of training and empowering STEM graduate students to effectively communicate their research to broader audiences. It has since spread to ten regional workshops throughout the nation, clearly demonstrating the desire from students for technical training in science communication. In addition to panel discussions and breakout sessions, part of the workshop includes creating a piece of non-technical writing and receiving feedback from peers and professional science communicators. Each ComSciCon deliberately accepts only sixty participants per workshop to maximize interaction and networking between students and experts, and is (excitingly) free of charge for accepted applicants.

For me, ComSciCon-MI started off with a ‘bang’ – I was given one minute to share my research as if to a lay audience before a digital ‘bomb’ timer went off. The audience had two signs to tell me how successful I was while I spoke; one side read ‘AWESOME’, meaning I explained a concept well, while the other read ‘JARGON’, indicating I had used a too-technical term. This was the first activity we completed as part of the workshop and it definitely succeeded in ‘igniting’ the excitement in the room. 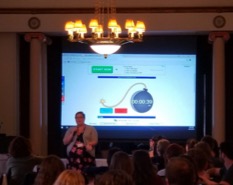 The workshop also included multiple panels on topics including science policy, careers in science communication, and techniques to engage diverse audiences. The panelists represented experts from equally diverse fields and careers, from past editors of major peer-reviewed journals to medical journalists and museum outreach coordinators. Each panelist shared their perspective on effective communication and offered advice on transitioning from a ‘hard-science’ career to one of science outreach. Hearing their stories and being able to directly interact with them reassured me that science communication is a valuable career goal, and put faces to professionals I hope will someday be my colleagues.

By far, the activities I found most influential were the breakout sessions. Led by the nationally-renowned UofM RELATE program, these sessions provided hands-on exercises in identifying the motivations and goals of different audiences, and practice in honing the central message of a given topic to maximize the success of your communication efforts. Attendees were challenged in one session to ‘half-life’ their message – meaning we first had sixty seconds, then thirty, fifteen, and eight seconds to transmit the ‘take-home message’ of our scientific topic to a partner. This challenging activity resulted in a lot of laughter from the nervous participants, but was excellent in pushing us to prioritize the information we convey and adapt that message to different environments.

Finally, I would be remiss if I didn’t share anything about ComSciCon-MI’s keynote speaker. Dr. Raychelle Burks earned her PhD in Analytical Chemistry from the University of Nebraska, and currently researches the development of detection methods for various drugs and explosives at St. Edward’s University in Austin, Texas. As if that wasn’t cool enough, she has also gained recognition as a popular science communicator – blending her love of all things nerdy with her technical knowledge of chemistry to reach broader audiences through outlets such as podcasts, television, and web series. Her video describing the chemical composition of a fictional ‘death cologne’ to help humans survive a Walking Dead-like apocalypse was even featured on Saturday Night Live. Her message to ComSciCon-MI was to combine your passions to create innovative science communication opportunities. Don’t be afraid to be a nerd: be yourself, go with what you know, and you’ll always be authentic. Her inspirational talk expanded the horizons of what I thought science communication could be, and further fueled my fire to pursue this rewarding career path.

ComSciCon-MI is a workshop I feel honored to have completed, and I wish to thank the MSU Department of Animal Science for its generous sponsorship. I also encourage any faculty members whose graduate students are interested in extension or outreach careers to share this opportunity with them, as it was one of the most valuable experiences I’ve had in my graduate career. The amount of training I received in such a short amount of time is remarkable, and an experience that I’m sure will prove advantageous moving forward. Most excitingly, I feel I’ve finally found my passion in science communication, and I am running with it.