In the Field: Janice Siegford

Author: In the Field

Before becoming an associate professor in animal behavior and welfare, Janice was a science communication major?

Before becoming an associate professor of animal behavior and welfare, Janice was a science communication major. She credits a huge part of her success to her early training in how to write, talk to people, and how to adapt to different audiences. 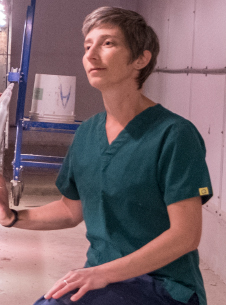 In the Field: Janice Siegford - Transcript

Kraig Ehm: Welcome to In the Field, a podcast originating from the College of Agriculture and Natural Resources at Michigan State University. I'm your host Kraig Ehm. In this episode of In the Field I'm joined by Janice Siegford, Associate Professor of Animal Behavior and Welfare in the Department of Animal Science at Michigan State University. Janice, when you were growing up, did you move around a bit?

Janice Siegford: My dad was in the military. He did 20 years in the Army and I was about two when he joined so I didn't get to live long in Montana where I was born but instead did a lot of time in the Southeast when my dad was doing basic training. Our first big station I guess was Virginia and then shortly after that we moved to Panama for three years. My brother and my sister and I are all born in different states. My brother's even from a different country and had to choose citizenship when he was 18 between Panamanian and American. We then did some time in the Southwest in Arizona, we went over to Germany, back to Arizona and we ended up with a really unusual posting in the D.C. area. My dad was a Communication Specialist for the Army and ended up in a unit that did secure voice communication for the President so he served under three different administrations and worked in the basement of the White House.

Ehm: No way. Which Presidents?

Siegford: He started with the first Bush, did Clinton and then a bit of the second Bush.

Ehm: Did you have a favorite place out of all the places that you've lived? Do you have one that you just say, "Wow, if I could go back and live there again that's where I'd want to go."

Siegford: Probably Germany. I was there when we were ... Let's see, I was between 8 and 10 and it was really an amazing experience in terms of the really really old culture that you could go see. We saw Roman ruins up in the north of Germany. We traveled all around Western Europe. The wall was still up then so we didn't get to go to Eastern Europe but I ate the most amazing bread and ice cream and fresh meat products and the Christmas markets. I think my view of Christmas has been forever shaped by Christmas in Germany with Kris Kringle Marts. I have a very deep fondness for Europe.

Ehm: Some people might now know this because you work in Animal Behavior but you originally majored in Communication.

Siegford: Yeah, I started life as a journalist. I actually wanted to go to University to study Equine Genetics but the high school I came out of didn't offer a lot of science so when my under graduate university looked at my application they said, "You're not quite strong enough to be a scientist but we'll let you in as a Science Communication major." I went to Cornell and I studied how to communicate science to the public and I had to take a lot of science courses as part of that major. I took Ecology, I took Anthropology and I took a lot of Animal Science. In fact, they actually thought I was an Animal Science major there I was in their building so often. In a round about way I sort of studied Animal Science while being a Communication major and to be honest, I think my early training in how to write, how to talk to people, how to adapt to whatever audience I'm working with, it's probably been a huge part of my success.

Ehm: What originally sparked your interest in working with animals?

Siegford: I come from a long long line of animal lovers. My dad and his father always had a soft spot for young orphaned animals and so even though they lived in a fairly small house on the edge of town in Missoula there was always a chipmunk being rescued or a robin or something like that. They had cats and dogs and spent a lot of time out in nature watching animals.

Siegford: My mom's family, they actually had kind of a small ranch and my Uncle John is really John Wayne reincarnated. He's an amazing cowboy and I've never ever seen anybody work with horses or dogs the way he does. Growing up I had all these people that were interacting with animals and it was fascinating watching them and the animals, the animals with each other and just from a really young age I think I've always wanted to just basically sit and watch animals.

Ehm: But it had to be a little challenging to be on a base right?

Siegford: Oh yeah. In fact when we were young, we lived a lot in apartments or four-plexes or things and my parents really wouldn't let us have animals because they didn't think it was fair to have a dog in an apartment or to have to move around a lot with an animal. We had hermit crabs and gerbils and small things you could keep in an aquariums but it wasn't until I started high school and we lived on a military base that actually had a riding stable that leased horses for the grand total of $85 a month all things included, yeah, saddle, bridle, feed, vet care, farrier work, everything, and I begged and I pleaded and so I leased my first horse. Between that and contact with the animals my Uncle John worked I started actually having some experiences with animals.

Siegford: Well, I've done everything from play a little bit of Polo to a little bit of Gymkhana to Jumping to Dressage and I have to say actually I like riding out of the arenas most. I love to trail ride. Really kind of use the horse as you hike.

Ehm: You studied animal behavior. Is it anything like human behavior?

Siegford: Well as I told my daughter Sophie, humans are just a different kind of animal so I would say that there's a lot of parallels. We have a lot of shared evolutionary history. We're a vertebrate, we're a mammal and what motivates us, what drives us at a very basic level is very similar to what it is for a lot of animals. We have maybe more ability to consciously reflect back on what we're doing or to plan or anticipate or remember, but really a lot of the basic essentials I think are very similar. And if you watch kids, then you watch a group of puppies, you notice a lot of similarities. And then when you watch pigs you're like, "Wow, there really are a lot of parallels."

Ehm: That would go probably with the teenage boys?

Siegford: Oh yeah, yeah. There's definitely some hierarchy, some wrestling, some you know you got to try and prove yourself kinds of things that go on with the teenage animals just like with our human teenagers.

Ehm: Now at MSU your work includes a wide variety of farm animals.

Siegford: Yeah. When I first got here my work started with pigs, little pigs, looking at weaning and how the stress of weaning affected their weight or abilities to learn and remember and it wasn't too long before I started working with beef cattle and then laying hens, then dairy cattle, then back to pigs again and here and there a scattering of horses, the occasional cat or dog project and random zoo animals too.

Ehm: What are you and your students studying now and why is it important?

Siegford: We have two main projects. One is dealing with pigs and we look at how genetics influences social behavior of pigs and whether or not we can actually describe their social behavior well enough to use that as part of our ability to select animals for breeding. If we can select animals lets say that are good at getting along or making up after a fight, only fight when it's necessary to establish order, then we have a lot less underlying aggression. Especially this becomes important as we put more and more big sows and things like that into groups because they can do a lot of damage.

Siegford: The importance there is we want to help producers transition to these systems where they group house because that's becoming more and more a requirement by law or consumer demand but the pigs fight when you put new pigs together and if you've got 250 pounds clashing with 250 other pounds with lots of teeth and muscle you can get injuries. We want better welfare for the pigs but we also want to make this workable for the producers. If we can use behavior as another tool in their arsenal to select animals that fit and are efficient and have good welfare that's our underlying goal. That's one aspect. And then on the laying hen side of things we really focus on looking at how chickens adapt to these new bigger systems and groups that we're starting to put them in as we move away from small, fairly bare and conventional cages to complicated systems with perches and nest boxes and litter areas and sometimes many levels that hens must learn to navigate. We explore a lot of questions related to does it matter what genetic strain they are, what their early experience is, and how the individual hens even that look remarkably similar to us, do they develop their own personal preferences for where to go in the system, how to use the different resources. And if we understand all this variation and the influence of genetics in early environment we can make sure we have a good match between the systems and the birds. If we end up with a bad match, welfare's not improved in this new system. It's in fact much worse. And then we also have problems such as hens laying eggs outside of nest boxes, which results in dirty eggs or fewer eggs and then of course that's even harder for a producer to cope with when they're already making changes to a newer system that may be more expensive. And it also allows them sometimes to have fewer birds in a system so you need to be able to maximize things from their standpoint too.

Ehm: Have you ever received the question, chicken or egg?

Siegford: Ah, which came first. Well, I'll have to go back to my training as a Zoologist, which is what I did my masters in and say the egg because we had eggs for animal species long before we had actual chickens. If you think back to early amphibians or the dinosaurs, eggs and then from the evolution of the dinosaur into a birdlike species, then we get the chicken.

Ehm: I would like thank Janice Siegford for joining me today on In the Field. Have a great day.