Japanese beetles are a major pest of fruit crops, turf and home gardens, and, since 2009, have become increasingly abundant in west Michigan asparagus fields. Michigan State University Extension will explain what we know, and don’t know, about scouting and managing Japanese beetles in asparagus.

Japanese beetles have one generation per year and overwinter as a C-shaped grub in the soil (read more on life stages). As the soil warms in the spring, larvae move into the root zone to feed. Beginning in late June and continuing into August, an increasing percentage of grubs gain the energy they need to pupate. They then emerge as adult beetles from the soil and search for places to feed, mate and lay eggs. These beetles, which live for one to two months, can feed on a multitude of plant species, including asparagus. Given their lifespan and extended emergence period, beetles are active for the entire fern season in asparagus. It is this adult stage that is the focus of control.

To scout for Japanese beetles, look for aggregations on the top of asparagus fern as you check fields for disease. Pheromone traps are also available and can help you determine when beetles start flying, but are not necessary for scouting as beetles are easy to see. When scouting, it is important to know that a related species, the false Japanese beetle, is also active in the sandy soils where asparagus is grown. However, with practice it is easy to distinguish this non-pest species from Japanese beetle. 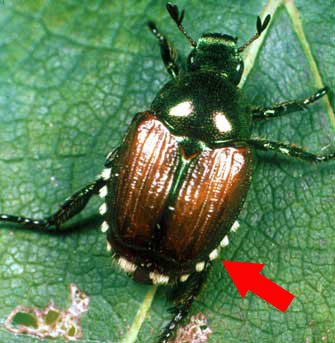 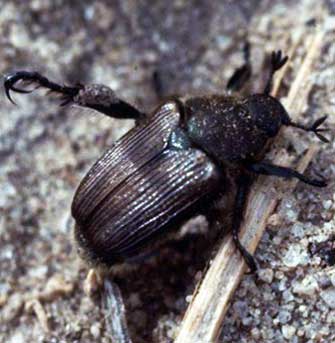 Japanese beetle adults (left), an insect pest of asparagus, have an iridescent green head and brown body with white tufts of hair along its edge (indicated by arrow). The false Japanese beetle (right) has a similar shape, but lacks white tufts of hair, and is not a pest of asparagus. Photo credits: Clemson University, USDA Cooperative Extension Slide Series, Bugwood.org (left), and Whitney Cranshaw, Colorado State University, Bugwood.org (right).

Currently, there are no thresholds available for making control decisions in asparagus. This raises an important point: although it can be present in large numbers, the extent to which Japanese beetles feed and reduce asparagus yield is unknown. Past observations suggest that Japanese beetles spend a good portion of their time in asparagus mating. In addition, Japanese beetle feeding is hard to distinguish from damage done by common asparagus beetles. Consequently, it is unclear how much damage Japanese beetles do in asparagus. Most growers take a cautionary approach given the high value of asparagus and relatively low cost of insecticides.

Among available insecticides, carbaryl is the most cost-effective option. One benefit is that applications of this insecticide also control common asparagus beetles. The main drawback is that carbaryl does not penetrate plant tissues and is susceptible to wash off from rain. This is a concern because this beetle is active in many habitats across the landscape and can easily fly from them into asparagus after the insecticide has worn off. As a result, insecticides may need to be applied multiple times to keep Japanese beetle numbers low.

Current research in MSU's Department of Entomology by Zsofia Szendrei is focused on using systemic insecticides to provide longer-lasting control of asparagus insects. This could provide a solution for Japanese beetles and asparagus miner in the future.