Dothistroma needle blight and brown spot needle blight need to be properly managed in pines. Recognize the symptoms and know how to control these diseases this summer.

Dothistroma needle blight is caused by the fungus Mycosphaerella pini. This common pine pathogen kills needles of all ages and can weaken or kill Austrian pine trees. We are also finding Dothistrom on white pine. The main symptom is dead needle tips beyond the yellow to tan needle spots that enlarge to form distinct brown to reddish-brown bands. 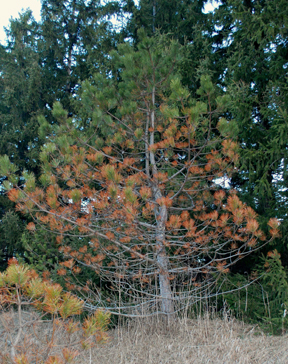 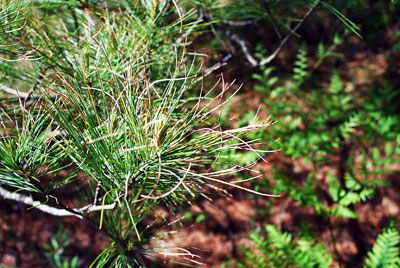 The black fruiting bodies of the fungus can be seen in the dead spots or bands on the needles. The spores spread by wind and rain and can infect needles throughout the growing season. New needles are susceptible once they emerge from the needle sheaths. The black fruit bodies appear in the fall; however, the spores are released the following spring and summer.

The best protection of new needles can occur when applying copper-based materials as the new needles emerge from the needle sheaths and as the spores are released from the fruiting bodies. To protect foliage from infection, apply a registered fungicide containing copper in mid-June through mid-July. This year, you might start earlier since trees are ahead of normal. Repeat the application two or three times as needed at seven- to 10-day intervals.

Brown spot needle blight (Mycosphaerella dearnessii, syn. Scirrhia acicola) is relatively new to Scotch pine in Michigan. Needle spots can appear on needles at any time of the year, but most commonly we find them during August and September when the tree suddenly turns brown just before harvest. 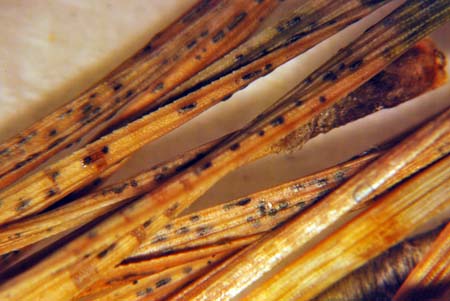 Even though we see the symptoms in the fall, fungicide applications should be timed when the new needles are about half grown (May-June) and a second spray about three weeks later. In rainy conditions, the spray interval may need to be shortened. Several fungicide products with chlorothalonil, mancozeb or copper are labeled for control.

Growers will also want to adjust their shearing practices to avoid moving spores into other plantations.