If you have Scotch pine trees with moderate or high populations of pine tortoise scale, you need to start scouting your trees in the southern portion of the Lower Peninsula. Pine tortoise scale is the reddish-brown, roundish scale that feeds on the woody part of pine shoots and small branches. It excretes amazing amounts of sugary honeydew. Black sooty mold then grows on the honeydew that coats the needles and branches. Trees can look pretty awful if the scale population builds up to even moderate levels. The black sooty mold seldom comes off the needles, even if you spray them with a power washer. Usually, growers have to wait for two years or so until the affected needles are shed before they can sell these trees.

Pine tortoise scale has a single generation per year. Eggs usually begin to hatch around 400-500 GDD50, so that is not too far off for southern Michigan growers. The crawlers are pinkish-red and can easily be seen moving about on the shoots and needles. What has been difficult for growers to trying to control this scale is that the eggs hatch over a relatively long period of time, continuing through 1,000-1,200 GDD50 (end of egg hatch and the last of the crawlers). 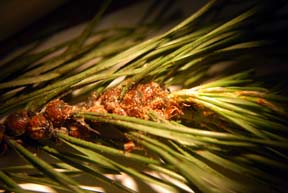 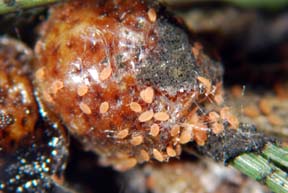 If you choose to use a conventional insecticide, choose a product with some systemic activity or a longer residual. Pine tortoise scales suck sap from the phloem and systemic products will get into the phloem. In contrast, pine needle scale sucks sap from parenchyma cells (the cells in between the outer epidermis layers) and systemic products will not be any more effective than contact insecticides. Whether you use horticultural oil or a conventional insecticide, be sure to get good coverage.

While you are scouting, keep an eye out for white, fuzzy insects that look like little mealy bugs. These little white insects are actually larvae of a ladybird beetle in the genus Hyperaspis. This species of ladybird beetles specializes on pine tortoise scale. The adults and larval ladybugs will eat the scale eggs and crawlers. At this time of the year, the ladybird beetle larvae will be very small. They may even crawl up and hide under the female scales on the needles. Once the eggs are laid, the Hyperaspis larvae will feed aggressively on the eggs and then on the crawlers. They will get larger over the next few weeks and you will probably see them on the infested shoots and branches. These ladybird beetles can be pretty amazing. We have seen a number of fields where this ladybird beetle controlled even heavy tortoise scale infestations in a single summer.